May & Baker Ease To Victory 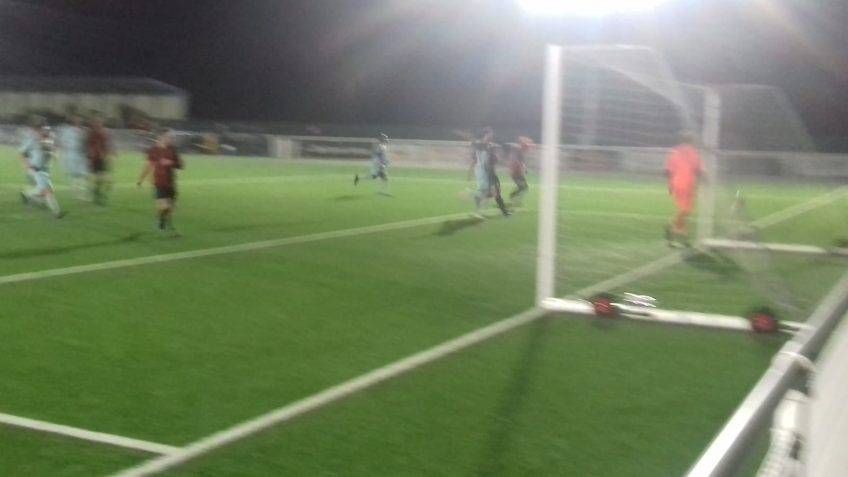 Barkingside’s promotion wagon took a slight detour on Friday evening as they came unstuck to a May & Baker side who themselves are one of the clubs in the chasing pack. In a game of few chances it was to be the hosts who were the most clinical with Ben Saunders, Dan Barth and Carl Patten getting their names on the score sheet and securing the three points for the hosts.

Barkingside wasting the opportunity to take the lead in the 10th minute when a through ball saw Muyiwa Osenie get into a one-on-one with Jack Riddell, with the host’s keeper doing enough to distract the on-rushing forward who then placed his shot straight at the Baker stopper. The hosts had an attack soon afterwards with Kane Messenger placing a shot narrowly wide.

The visitors had a little spell of pressure, which won them a series of corners, but it was to be the hosts that had the ball in the back of the net on 23 minutes. However the referee had seen an infringement in the build-up meaning that Patten’s final touch was in vain as the goal was quickly chalked off.

The hosts continued to pepper the Side goalmouth, with Barth having a shot blocked in the 32nd minute. A May & Baker free kick narrowly missed the target, while a Barkingside free kick in the 39th minute was drilled straight into the wall, then good approach play from the visitors came to nothing as Ali Rajim skewed his shot wide.

The one clear cut chance of the game came in first half stoppage time. A May & Baker free kick fell to Saunders, who controlled the ball on his chest, then turned and fired a first-time shot past Jack Ryan to give the hosts the lead.

The first chance of the second period fell to the hosts and they utilised it to the fullest. A ball into the box played in Barth and he rounded Ryan and fired the ball into the net. 60 seconds into the half and the hosts had doubled their lead.

Barkingside literally gifted their hosts their next goal. A defensive mix-up was punished by Patten who thumped the ball beyond Ryan. And then the visitors found themselves in another one-on-one, this time at the other end, but again the chance came to nothing as Rajim had the ball taken off him by Riddell; the host’s keeper also tipped a Joe Gent effort around the post.

Side were looking to try and get back into it, but the hosts almost scored again when a ball into the box was fired hard and low into the bottom corner by Gabriel Odili, but Ryan pulled off a great save and tipped the ball away.

The closing quarter of an hour saw Barkingside create a few chances but Johnson Santos and Shaq Foyewa were both denied by Riddell and in any case it was by then too little too late. May & Baker put their chances away and coasted to the three points that now sees them 9th in the table, 3 points outside the last promotion spot but having played less games than the teams above them. Barkingside meanwhile are drop down slightly to 7th.