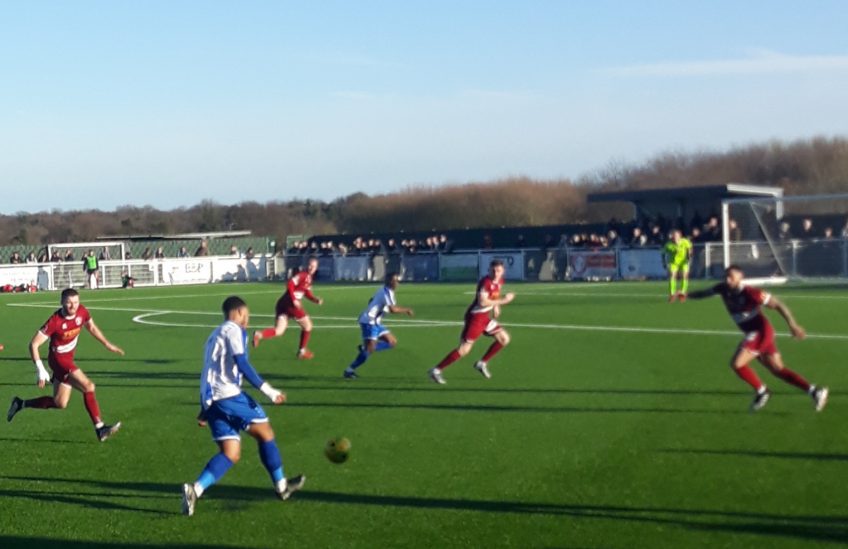 Isthmian North outfit Aveley are in the FA Trophy quarter-finals for the first time in their history after they scored a shock win over National League South opponents Chelmsford City this afternoon.

Striker Alex Akrofi had the first chance of the match for Aveley with less than two minutes played but fired his shot straight into the arms of Chelmsford goalkeeper Laurie Walker.

Then at the other end City’s Sam Higgins had a half-volley that was fired over the crossbar.

After 9 minutes Chelmsford’s Ollie Muldoon had an excellent right-footed effort which David Hughes in the home goal did well to push round the post.

After 12 minutes a superb free-kick from Jason Raad – awarded by referee Daniel Middleton following a foul by Muldoon – evaded the Clarets defence and sailed past the diving Walker into the left side of the net to make it 1-0 to the Isthmian North outfit.

The pacy Akrofi – once signed for Chelmsford by ex-manager Rod Stringer but who left without making a senior appearance – was causing the visiting defence problems with his pace and almost broke clear on a couple of occasions.

Just before the half-hour mark a good cross from City youngster Danny Imray – whose fine performance put many of his more experienced colleagues to shame -found Chris Whelpdale in the box about five yards out.

He stretched out for what should have been an equaliser, but Hughes managed to stop the ball with his legs and clear the danger.

Keith Rowland’s men seemed to be utilising the width of the pitch more than their opponents, as was proved when midfielder Wyan Reid found himself in plenty of space down the right as was able to advance unchallenged on goal, but his subsequent shot was wide to the right of Walker.

Then the Clarets had another half-chance when Tom Knowles’ effort sailed across the face of Hughes’ goal, but again it sailed wide and Aveley went in a goal to the good at the break. 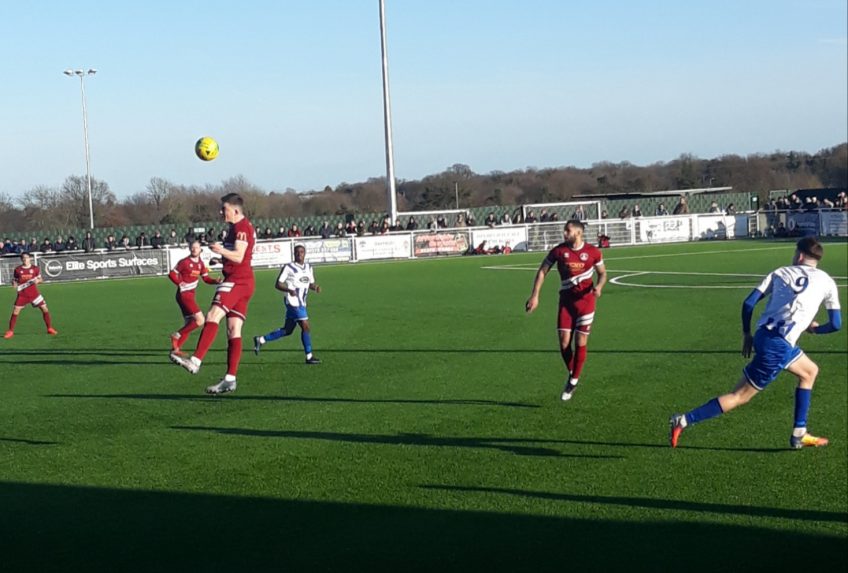 The Millers started the second period brightly but Chelmsford number 9 Higgins turned and had a shot on target 10 minutes after the restart, though Hughes was able to gather it without much trouble.

But a couple of minutes later some sloppy Clarets defending let in Aveley’s George Sykes, who would have doubled their lead but for the intervention of Muldoon who cleared off the line after previously losing possession.

Chelmsford rang the changes as Jeffers, who had taken a knock early in the second half and was struggling made way for Billy Knott and the visitors changed to a 4-3-3 formation.

And the former Bradford City midfielder was in the thick of the action almost immediately as he had a shot blocked well by home defender Jonathan Nzengo.

At the other end Raad had a second free-kick on the edge of the area but this time he was unable to angle his effort past Walker, and it floated some distance over the bar.

Then with 20 minutes left, the home side appealed for a penalty when Sykes went down in the box but claims that City interim player-manager Robbie Simpson had fouled him were waved away by referee Middleton.

Then with 11 minutes remaining Chelmsford went on the attack and Whelpdale drilled the ball past Hughes into the net to bring the scores level.

But just as many thought the tie might be heading for extra time, Akrofi stole the tie for Aveley when he beat his man and slotted past Walker to put the Millers back in front.

And late into time added on Nzengo put the tie completely beyond the Clarets’ reach when he unleashed a stunning strike from 30 yards out which landed in the top left corner of the net.

The final whistle unleashed joyous celebrations from the home players and their supporters in what was by far Parkside’s largest crowd to date this season, and the sizeable contingent of City fans were left ruing a wasteful and sometimes incoherent performance by their side.

The tie was not a one-sided affair, but on the basis that they took their chances and were better organised than their step two opponents it is difficult for anyone to begrudge Aveley their victory.

The Chelmsford board are due to appoint Stringer’s successor this week, and whoever it is may have the task of making sure of National League South football again next season judging by today’s display.