Billericay maintained their recent trend of serving up thrilling high scoring matches with a 3-3 draw at home to Tonbridge Angels. All the goals came in the second half with the Angels taking the lead through Jason Williams. The Blues stormed back with three strikes in five minutes. Jake Robinson from the spot, Femi Akinwande, and Alfie Potter were all on target.

Tonbridge made the most of Billericay’s tendency to let winning positions slip and secured a share of the points through Christ Tiehi’s curled effort and a second Williams strike. 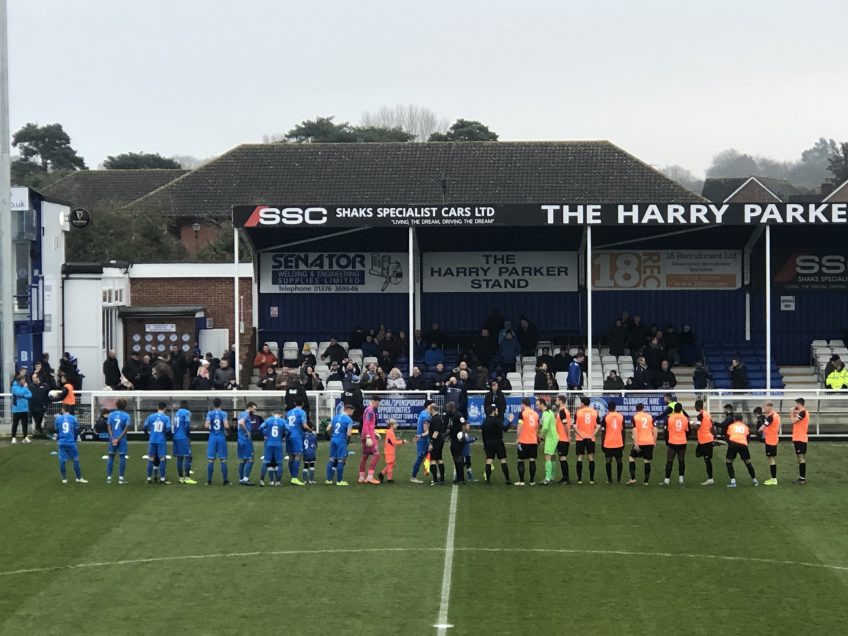 Billericay made just the one change to the side that had shared eight goals in the draw at Dorking Wanders. As striker Dejon Noel-Williams was unfit, Jamie O’Hara started new arrival, Ossama Ashley. A regular for Wimbledon U-23’s last season, the midfielder was rewarded with a pro contract but has seen progress disrupted by serious injury. Now fully fit, an initial one-month loan agreement provides the opportunity for first team football.

O’Hara elected to start with the diamond formation using Robinson and Akinwande as the strikers and, initially, Ashley as the most advanced before switching during the match. This tactical set-up had previously been utilised against the wing-back formation favoured by Dorking. With Tonbridge tending to operate with the extra man in central midfield, the same principles applied. As Alan Julian is still recovering from injury, Charlton loanee goalkeeper, Nathan Harness stayed in the side for his fourth consecutive appearance. 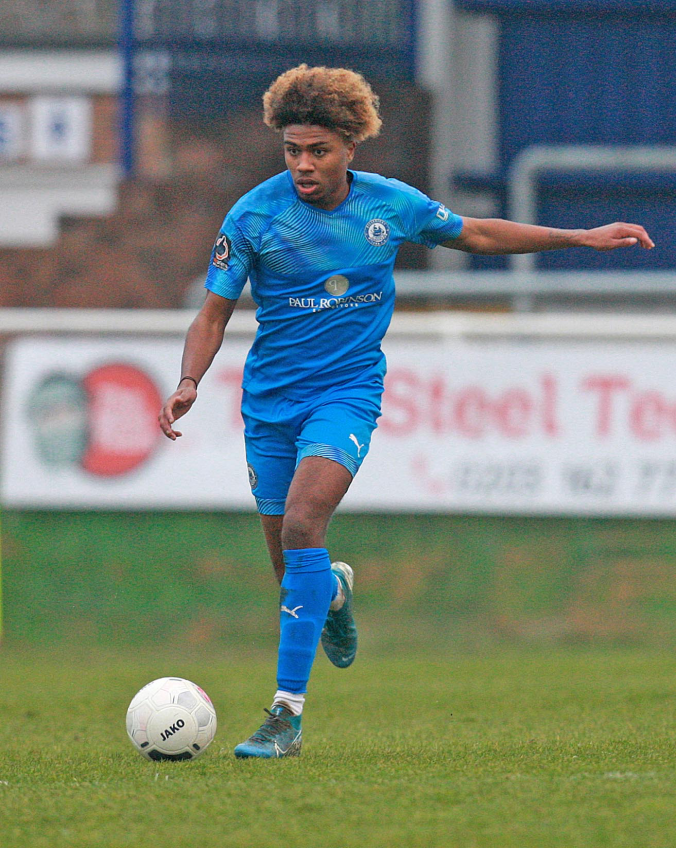 Tonbridge boss, Steve McKimm made one change to the line-up that had secured the vital first win away of the season at Braintree Town. With injuries and unavailability hitting the squad from late December, a number of new faces had come into the team since the previous meeting with Billericay at the Longmead Stadium in early December. Dover loanee, Bilel Hinchiri came into central midfield and Josh Ajayi, 17 years old, Crystal Palace U-23, was deployed in an attacking midfield role to lend regular support to lone striker, Williams.

Full of confidence after two wins and a draw at Maidstone in their previous outings, Tonbridge started brightly. In-form striker, Williams, with two goals in the last three matches, took up good positions in the penalty area as balls were flighted in. Early exchanges saw Blues skipper, Ronnie Henry, forced into defensive action. Once at Southend United, Williams accumulated 14 substitute appearances, before departing in May 2017.

Billericay looked the part, maintaining possession and developing passing movements, as they grew into the game. Tonbridge, well-organised, were content to hold their shape and let the home side move the ball around in front of the back line. The Blues new signing Ashley began encouragingly, maintaining presence in central midfield. Looking to play the ball forward, his intent was honourable although weight of pass was sometimes heavy.

In a barren opening twenty minutes, only a Robinson overhead counted as a shot on target. It was down to the more industrious to catch the eye. Alfie Potter shone as his all-round game contributed to the Billericay cause. One moment tracking back to make a fierce tackle, the next spreading the ball intelligently to the flanks, or probing for a gap in the Tonbridge Maginot line. On the Tonbridge side, left-back Alex Bentley impressed throughout. With his tenacity and pace, he proved difficult to best. Equally adept on the attacking side, he was a willing runner down the flank and supported the more advanced Ben Greenhalgh well.

Since his arrival in Kent, Christ Tiehi has lent added steel and drive to the Angels’ engine-room. Shaking off the shackles of his defensive midfield role, the energetic Frenchman burst through the central area, forcing Billericay’s Doug Loft to earn a yellow card by bringing him down. Fellow Frenchman, Hincheri, fired the resulting free kick narrowly over the crossbar.

The home side’s best chance to break the deadlock came on 31 minutes. Robinson found space six yards out but could not get a clean connection on Ben Nunn’s low cross.  Unperturbed, the quietly efficient Nunn continued his regular forays down the mud bath that passed for a right flank. Another centre found Akinwande. His strike was on target but could only find the boot of opposing right-back, Liam Smith, who deflected to safety. 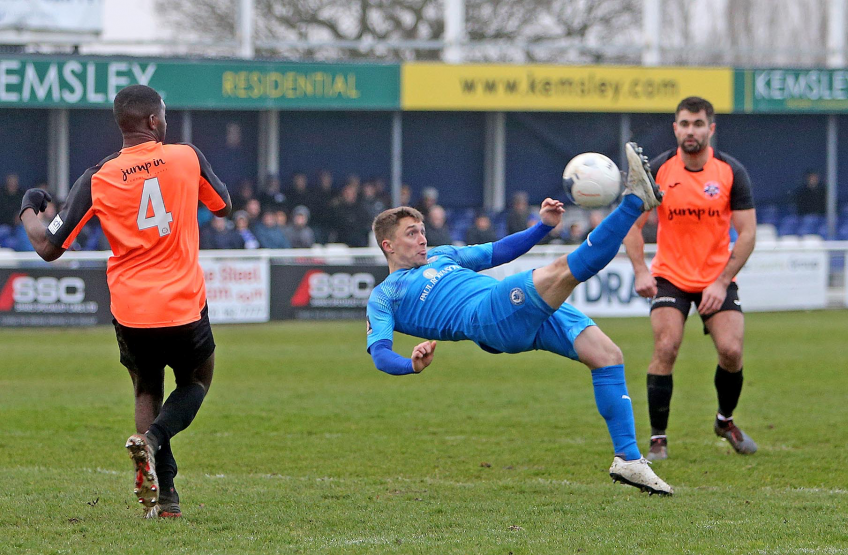 Potter turned creator to carve out a golden opportunity by sliding a perfect ball through the Tonbridge defence. Racing through, on 41 minutes, Ashley attempted to fire across Jonathan Henly. Reacting swiftly the goalkeeper spread himself well to make a diving save.

In response, Tiehi called Harness into action with a long-range shot that needed to be tipped over by the goalkeeper. The first period ended with a combination between Akinwande and Robinson that saw Ashley fire a good chance over the bar when well-placed in the area.

The second half served up an entertaining treat laden with goals, excitement, and the flow of an NBA basketball match as defensive coaches took the afternoon off. Having seen Billericay build up momentum towards the break, it came as something of a surprise to most of the home crowd that the Essex side would concede the first goal on 48 minutes.

That Tonbridge’s opener came from a set-piece corner routine may be less of a shock. A flighted ball from Joe Turner to the back of the penalty area was volleyed goal wards by Liam Smith. Williams, ever the predator, managed to latch onto the trajectory and make doubly sure of the strike by heading firmly past Harness from close range.

Talk of lions has long since dissipated as a result of a more measured environment at New Lodge nowadays. Nonetheless, the beast was metaphorically awakened to spark a three-goal salvo in response. On 51 minutes, Ashley earned a penalty after his burst forward was ended illegally by a poor tackle from Turner. Robinson made no mistake from the spot, firing convincingly past Henly. 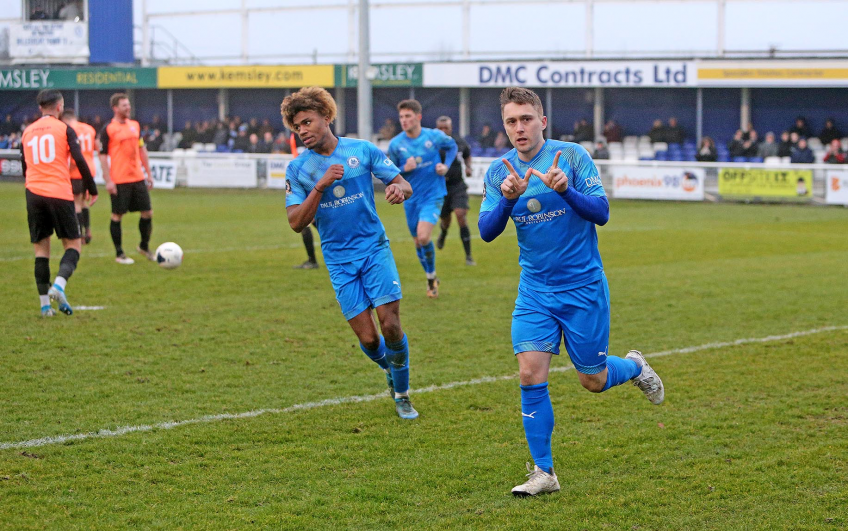 Billericay, frequently criticised for their defensive vulnerabilities, can also be scintillating going forward. Two further minutes brought further strikes from Akinwande and Potter. Ashley was once more involved, flicking the ball into the penalty area for Akinwande to chase. Driving forward, the big striker displayed an admirable level of finesse as he delicately threaded a precise shot past into the far corner of the net to give Blues the lead. 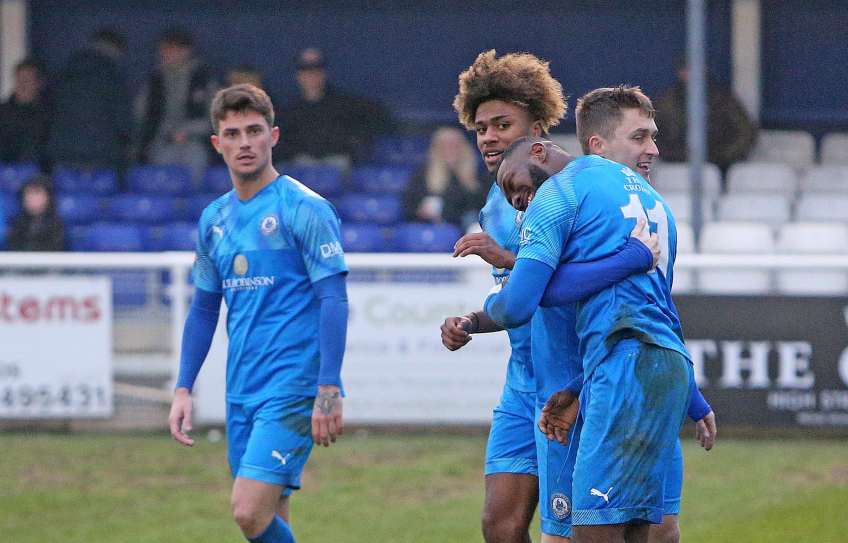 Potter crowned an impressive performance with his first ever league goal for Billericay. It has been a long time coming but it was a goal that will be remembered. Picking up possession from an Akinwande flick forward, Potter drove into the penalty box. Forced wide by the covering defenders, he made light of his diminishing angle by powerfully smashing the ball left-footed into the top near corner of the net. 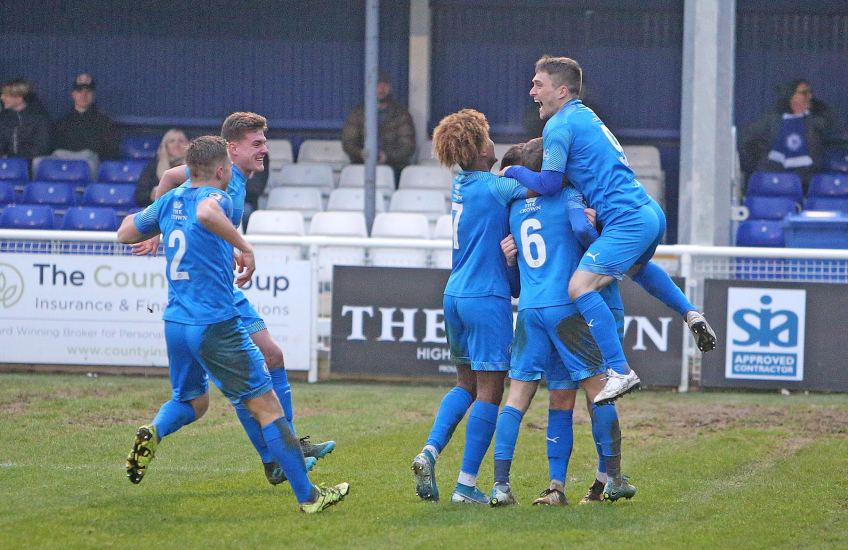 Alfie Potter is engulfed by team-mates after his first ever competitive strike for Billericay. Photo Courtesy @nickyhayesphoto

Having seen Tonbridge recover from a two-goal deficit to win at Longmead earlier in the season, it would be no surprise to see the Kent side rally strongly in the belief that something could be salvaged. The loss of two goal advantages at home and away to Dorking, the most recent example only occurring last week were fresh in the mind. With Harness having to display a strong hand to push away a Greenhalgh header at the far post moments after the Potter strike, fear rose in the crowd that the collapse was on.

Tonbridge upped the intensity and displayed much more urgency in getting forward. Breaking rapidly, crosses into the Billericay penalty area were increased and locating willing targets. At the far post, Turner regularly found space, troubling the Essex side’s rear guard. Only a quick-thinking Potter who dived to block prevented the visiting winger from registering on the score sheet. The visitors would not be denied for long.

A poor clearance from Billericay’s Themis Kefalas found Hincheri 25 yards from goal. He swiftly squared to Tiehi who curled a sumptuous effort into the top corner on 73 minutes. Sensing a come-back, O’Hara sought to wrestle back control with a double substitution and tactical change. On came Louis Ramsay for the tiring Ashley. Playing on the right-side Billericay used Ramsay to switch to 4-3-3. In a like-for-like change, Jacob Cook replaced Loft.

Whatever the merits of the change, it did not work as barely three minutes later the Angels drew level. Errors across the Billericay back line were evident with all equally culpable for the equalising goal. On as substitute for Greenhalgh, right winger Jared Small too easily skipped past Harry Hudson to deliver a far post cross. Picked up by Turner, he evaded Nunn and centred for the unmarked Williams. He side-stepped Henry to shoot home on 77 minutes.

The Blues visibly tired in the final 10 minutes and lost shape as Tonbridge as the midfield dropped back to defend too deep leaving a notable chasm between the isolated front line and the rest of the team. Even so, Billericay almost snatched a win at the death as Kefalas’s attempt to steal in at the back post to head home was thwarted by Smith’s diligence. 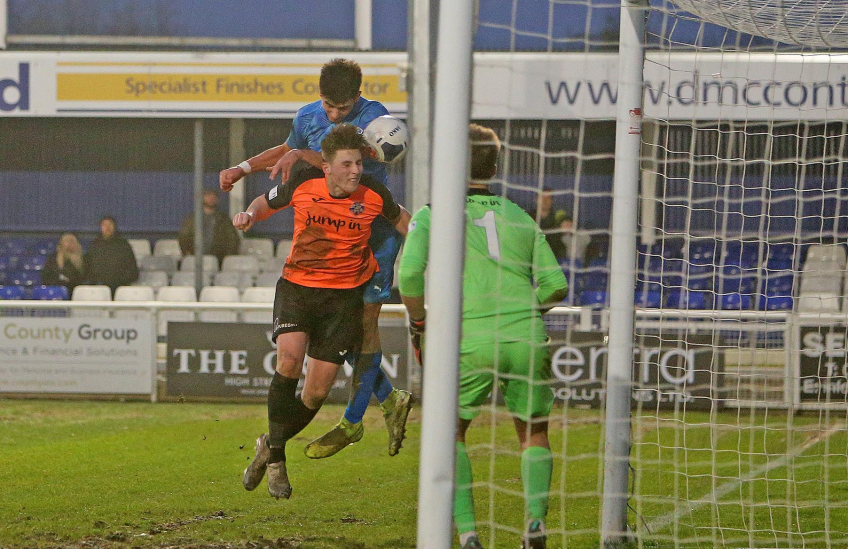 Themis Kefalas is foiled at the far post by Liam Smith as he seeks a late Billericay winner. Photo Courtesy: @nickyhayesphoto

Yet again, Billericay have relinquished vital points when in a strong position. The front-line can be devastating and functions well, midfield misses Sam Deering but is adapting with Paxman and Potter contributing and Loft or Cook providing security. It is clear that the problem is the leaky back line. The lack of a commanding centre-back has been an issue for some time. It may well be next season before the solution is achieved since the answer to this particular problem is unlikely to be available or plying his trade at an academy.