Basildon maintained their recent upturn in form under caretaker manager, Lee Connor, with a 3-2 home win over fellow strugglers, Brentwood Town. A second half strike from substitute, Jimmy Cox, settled matters after goals from Harry Doyle and Ernest Okoh were cancelled out. Marcus Milner and Andrew Freeman had earlier hauled the visitors’ level.

On a chilly late November afternoon, the Cousins Car Wash Stadium provided the backdrop for Basildon to make further progress in their bid to scramble clear of the relegation place in the Isthmian North. With Basildon in 18th, Brentwood 19th, and only Romford lower placed in the league at the start of the day, the match-up had all the hallmarks of a six-pointer.

With bottom side, Romford, expected to improve their position after the announcement of new investment, a win was vital for the Bees. Seemingly revived under vice-chairman, Connor’s direction, the hunt for a permanent manager has been shifted to the backburner as points accumulate.  Impressive victories over both Tilbury and Canvey Island, and a fine draw against Hullbridge Sports, represent a powerful declaration of improved form.

Brentwood came into the game on a poor run. Having to play the last three league games away from home, due to weather related postponements, has not helped. Defeats on the road at Dereham Town, and Canvey Island, followed a draw at Felixstowe. With player manager, Ryan O’Rawe, well served by a free-scoring attack, better results look to be contingent on finding a solution to average goals conceded of just over two per fixture.

Basildon made one change to the side that secured a point at Hullbridge. Back came defensive midfielder, Kristopher Newby, after serving a suspension. Nathan Okoye made way, dropping to the bench. O’Rawe made two switches to the visitors’ line-up, fielding himself back in central defence in place of Zak Pianim. At the same time, Tom Anderson, cousin of Southend legend, Freddie Eastwood, came into midfield to replace Michael Toner.

After a cagey first five minutes, Basildon sprang into life with the first goal. With Conor Mead finding Kris Newby in space on the right-hand side, the midfielder advanced and curled an inviting cross into the danger zone. Moving clear of his marker, striker, Doyle ensured he gobbled up the chance by heading powerfully home from close range. 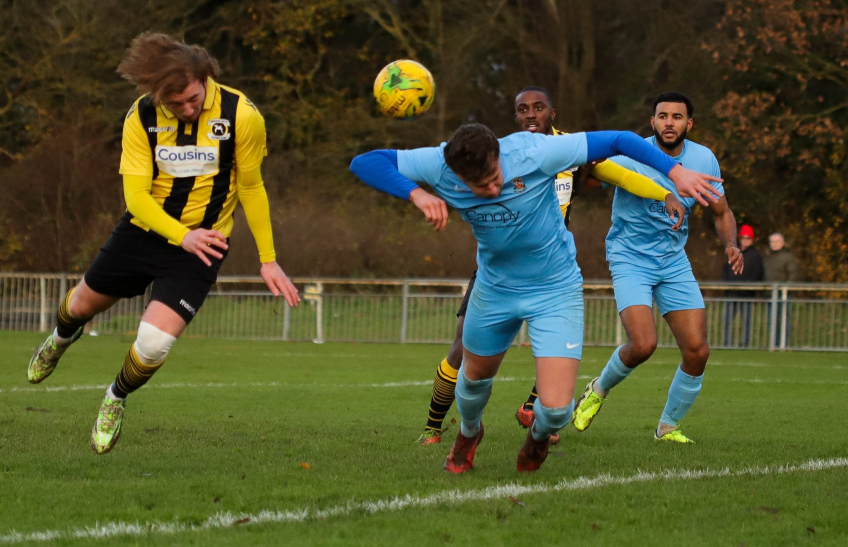 With Basildon winger, Okoh, on a fine run of form, illustrated by a goal in each of his last seven appearances, it was no surprise that the Bees regularly looked to the left channel to involve him. Harry Norman, who was the main creative outlet for the Bees, found the speedy winger with a superb cross-field pass, to launch an early attack. Showing a turn of pace, and willingness to cut inside, Okoh fired in a shot that was comfortably fielded by Tim Brown.

As the match progressed, Brentwood took their chance to break on a Basildon side that pushed forward. Twice in succession, home centre-back, Joe Turpin, was forced to intervene. First, he halted Freeman in full flight as he headed for goal. On 12 minutes, he moved swiftly to shut down Rene Batlokwa, as the winger prepared to shoot from 15 yards.

Brentwood’s persistence paid off on 19 minutes as right winger, Marcus Milner, swooped in the penalty area to equalise with a fine, side-footed finish. Good work down the Basildon right flank made the goal as Batlokwa beat Mead and found Freeman. Keeping a cool head under pressure, the striker’s pass across the box was put away clinically by Milner.

Back came Basildon as a neat through pass from Norman found Doyle. Nudging the ball to his left, Okoh took possession and burst into the Brentwood box intent on shooting. Right-back, Anthony Furlonge, who cut a convincing presence at the back, sped back to close down the threat, stretching to concede a corner with a well-timed defensive intervention.

If that was a warning to Brentwood, it was not heeded as Basildon took the lead on 25 minutes. Right-back Mead was the supply line, sending in a cross, that an inattentive defence allowed danger man Okoh to latch onto. Sending a controlled, low finish across the goal-keeper, the winger’s incredible run on the score-sheet continued for another match. 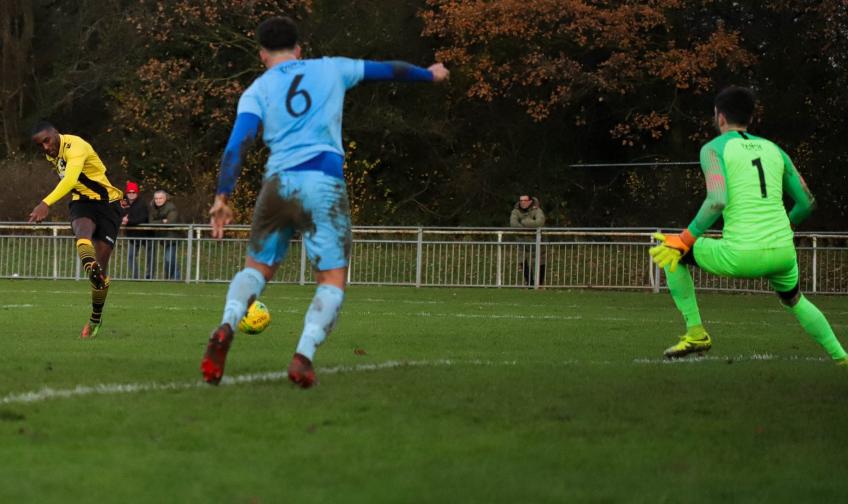 Ernest Okoh maintains his fine scoring run for Basildon with another strike against Brentwood. Photo: @photography_mjt

With scarcely time to say that you are never more vulnerable than when you have just scored, Brentwood equalised on 26 minutes as a break ended with Freeman smashing home. With goals flying in, the crowd could have no complaints in terms of excitement. With Billericay Town visiting on Tuesday night in the Essex Senior Cup, a number of supporters had made an advance visit after the postponement of their club’s fixture.

Norman continued to show his colours as a creative outlet taking down a difficult flighted ball. Finding Newby, the midfielder flighted his cross towards Doyle in a bid to create the first goal. This time, Brentwood were quick to close down the chance. Centre-back Jack Kemsley spotted the opening quickly and arrived in the nick of time to head clear.

The first period finished with further Brentwood pressure as Bees keeper, Clarke Bogard, unconvincingly punched clear a Jacob Wiggins free-kick sent over from the right flank. Much more impressive, moments later, Bogard pulled off an eye-catching diving save at full stretch to divert Batlokwa’s excellent, curled effort, which was headed for the top corner. 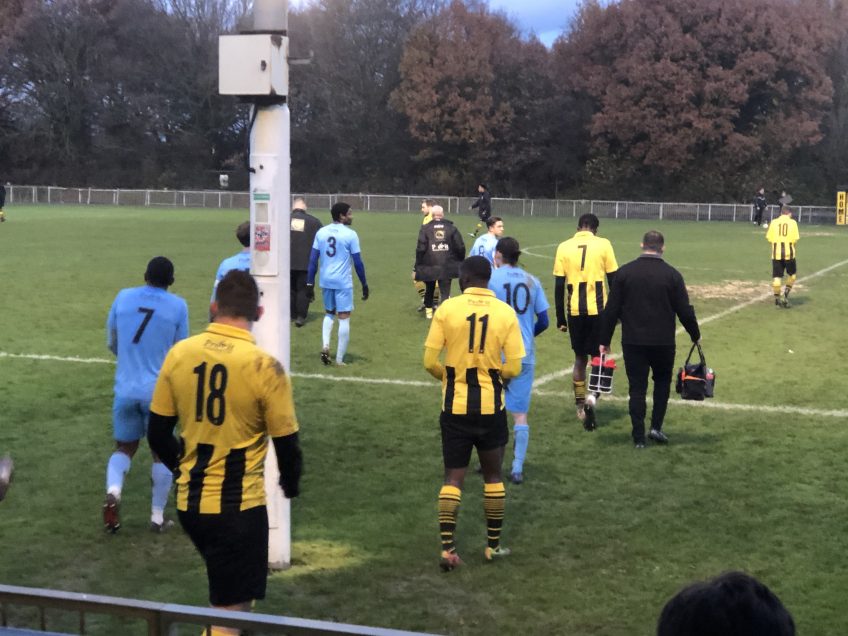 Players head back for the start of the second half. Photo: @beakster99

After the break, the initial excitement caused by Basildon’s Darren Phillips’s header being cleared off the Brentwood goal-line dissipated as we saw a much tighter game. With combinations difficult to achieve, and a host of misplaced passes, further threats on goal were at a premium as the match paused for breath. Only a Milner cross, rifled over by the visitors’ play-maker Wiggins when well-placed, was of note.

It was the introduction of a substitute that finally enlivened the match as Khadean Campbell entered for Brentwood on the hour. He provided added energy on the left flank and immediately got involved forcing a last-ditch tackle from Basildon’s Thomas Anderson, himself a substitute on at half-time. With Brentwood also fielding Thomas Anderson, this created the unusual situation of each team fielding a player with the same name.

Basildon had their own super sub, Cox, who entered at half time in place of Doyle. Signed 8 days ago after his release from Romford, he looked dangerous throughout. The ‘Boro’s loss proved to be Basildon’s gain as he was on hand in the penalty area to slot home into the far corner on 65 minutes to move his new employers seven points clear of his former side.

With Campbell and Freeman combining on several occasions in response, the Bees had to be on their guard. Blocks from Anderson, and a series of powerful headed clearances from home centre-back Phillips, helped to hold back the Brentwood response. There was a nervous moment when Freeman raced to close down the goalkeeper and managed to block his clearance. Luckily for Bogard, the ball span away to safety far from goal.

Quieter in the second period, Okoh still managed to remain involved in Basildon attacks drawing a 70th minute save from Brown as his drive was pushed clear. For Brentwood, Campbell remained a lively presence, playing in Freeman two minutes later. The striker surged to the by-line and cut-back to Batlokwa who could only fire over.

Basildon pushed forward but could not extend their lead. The closest that they came was after good work on the right from winger Ayo Odukoya who beat his man and sent a ball to the far post. Stretching to make contact, Cox was just unable to get in a position to finish. 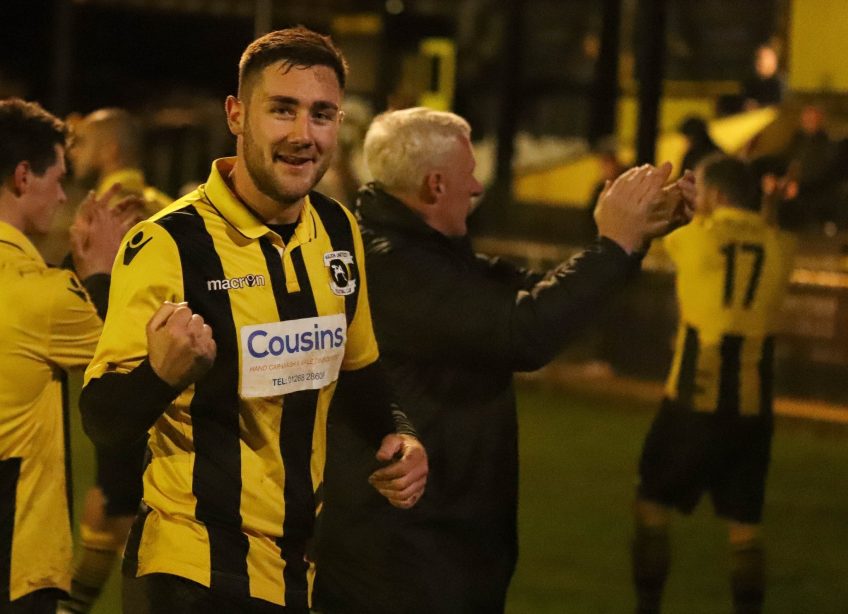 It did not matter in the end as the Bees held on for an invaluable win. With positive results starting to come, the Basildon can enjoy the prospect of a test against higher league opposition on Tuesday evening in the Essex Senior Cup as local neighbours Billericay come to visit. With the encouragement of only being defeated by a single goal at New Lodge back in September, the Isthmian North side will nevertheless need to raise their game against Jamie O’Hara’s team.

A threat all game with his pace on the left and willingness to cut in and shoot. Crowned his performance with yet another goal and is Basildon’s most direct attacking outlet.