Using tech to keep in touch 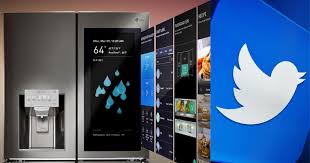 When I was a child if I’d been naughty my mother would threaten to take away my favourite toy, but if I wanted to get the upper hand I’d fetch said toy, hand it over and say “here you are – keep it if you want”.

See I was awkward even then!

But it’s all so different today as one mother found when she confiscated her daughter, Dorothy’s smart phone.

Mind you Dorothy had set the kitchen on fire whilst not paying attention to what was happening in the frying pan, whilst busy tweeting.

But all it seems was not lost as the 15-year old was not to be so easily put off.

She may have lost the phone but determined to keep tweeting she first turned to her NINTENDO 3DS, but after her mother found out she switched to using her Wii-U and when her mother found out and shut off that avenue too, Dorothy decided to bring out the big guns and put the features on the family’s smart fridge to the test.

“I don’t know if this is going to tweet I am talking to my fridge what the heck,” she said. “My mum confiscated all of my electronics again.”

While some had doubts that she was actually able to tweet from a fridge, it seems that she might actually have succeeded.

The tweet’s source revealed that the post came from an LG smart refrigerator and the company’s website confirms that their devices do have social media capabilities.

So there you have it!

From accidental kitchen fires, we moved on in the second hour to Margaret Mills who had news of arson which attacks seemingly occurred on various Essex farms back in the 19th century.

Listen again here to Margaret’s report on these events: –

Right I’ll see you once more next week,
Scott