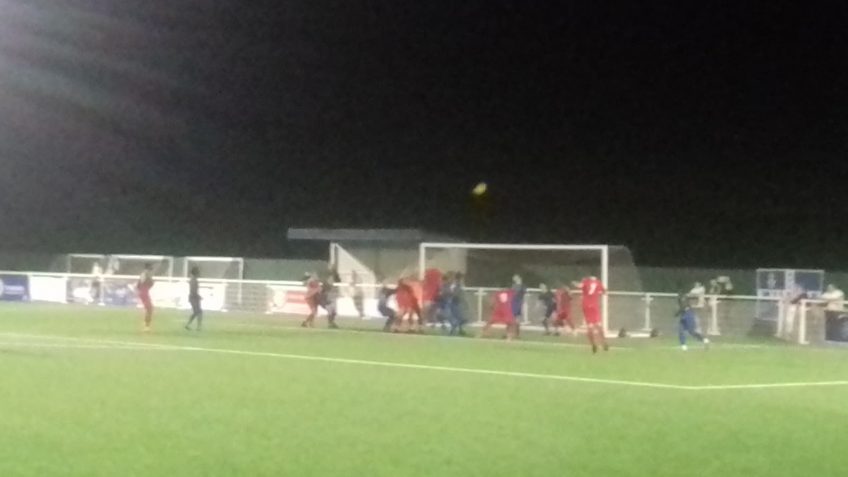 Barking are into the next round of the FA Cup after coming through a tense game with Essex rivals Aveley at Parkside on Friday evening. The host’s had to switch the tie to Aveley’s Parkside venue due to on-going pitch issues at their own Mayesbrook Park base, a charitable act between the two clubs, but once the game started both teams had their moments in an enthralling cup tie that had thrills, spills and plenty of no nonsense tackles. For Justin Gardner it meant he was able to get one over his former club

It was the Millers who had the first chance when Aaron Condon managed to burst through the Barking backline and unleashing a cross shot that was only a little too high. With cage now rattled, Barking then carved out two scoring opportunities themselves as first Nana Boakye-Yiadom had a shot deflected away for a corner; then Joe Bruce managed to get his head on the end of a Barking corner that was blocked by George Allen.

Johnny Ashman showed good skills to take on a couple of Aveley players as he burst down the wing. Ashman then sent over a cross that reached Emmanuel Igbora, but the final shot was cannoned high and wide of David Hughes goal. Aveley responded with a counter-attack in the 15th minute as Alex Akrobi curled a shot that needed Mitchell Ware to be at his best to cut out.

There was little to choose between the teams; both had pace upfront but also had solid defences. However Barking found a way through in the 18th minute. Emmanuel Ighorae turned and let fly, his effort being well saved by David Hughes, but Ashman was lurking at the back post and he was able to stab the ball home to place Barking in the lead.

Aveley however picked themselves and Akrobi was able to win his side a corner as his cross was knocked behind. The corner was cleared and it seemed like the attack had petered out but Wyan Reid whipped in a cross from the right that forced Mitchell Ware to back-peddle before claiming the ball. The Barking stopper also pulled off an excellent diving save to keep out a long-range shot from Reid.

However there were also moments of wastefulness, with a Kojo Apenteng cross eluding the Aveley keeper, but with no Barking player reading the situation meant the ball floated away. Aveley themselves were unable to capitalise when Sam Mvembe delivered a well placed cross from the left but none of his team mates were lurking at the back post, meaning another decent cross came to nothing.

And both teams were unafraid to put in solid challenges, such as when Akrobi was upended by Owusu, which earned him a yellow card. Akrobi curled the resulting free kick over the bar. Conor Witherspoon put in a solid tackle to win a ball, before then launching an offensive that ended with Aaron Condon lashing a shot wide.

Just before the break Aveley had shouts for a penalty when Apenteng blocked a corner, which had some of the Millers fans behind the goal claiming he had used his hand; play continued as the referee waved the claims away and the next ball into the Barking box was again dealt with by Apenteng who this time removed the ball out of the area without any alleged indiscretions.

A couple of early crosses saw Ashman for Barking and Reid for Aveley send over balls that were cleared by the respective defences. In the 54th minute Boakye-Yiadom fired a free kick over Aveley’s cross bar. The Millers retaliated by working the ball into Barking’s box, but Apenteng could only skew his shot wide.

However the Millers were back on terms in the 57th minute when Mvemba placed a ball over Barking’s defence which was met by Reid who steered the ball beyond Ware.

But Barking regained the lead in the 60th minute when Boakye-Yiadom turned his marker and placed a low shot into the bottom right hand corner of the net.

However Aveley looked to get back on terms and only bravery from Ware prevented Akrofi from grabbing an equaliser as the Barking keeper got down to claim the ball at his feet just as he was about to shoot. Fahad Nyanja dragged a shot wide for Barking, while Akrofi got himself in good positions but found himself dispossesed by a solid challenge from Jack Hayes, and then in his next forward foray found himself unable to beat Ware on a one-to-one as the Barking keeper smothered the ball.

Ashman drilled a Barking free kick wide before Witherspoon had a last ditch shot blocked by Routt. In the end a very resolute Barking had just enough to overcome an equally resolute Aveley, with the Blues now awaiting to see their next opponents when the 1st Qualifying Round draw is made this week.