Music, chat and strong on sport too

Written by Paul Golder in In The Papers👁 541 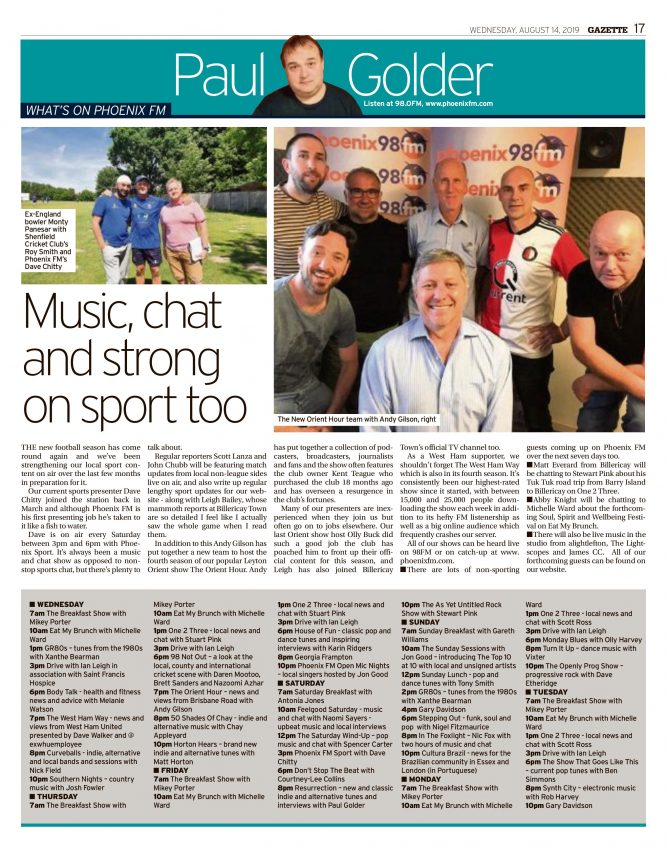 The new football season has come round again and we’ve been strengthening our local sport content on air over the last few months in preparation for it.

Our current sports presenter Dave Chitty joined the station back in March and although Phoenix FM is his first presenting job he’s taken to it like a fish out of water.

Dave is on air every Saturday between 3 and 6 with Phoenix Sport – it’s always been a music and chat show as opposed to non stop sports chat, but there’s plenty to talk about.

Regular reporters Scott Lanza and John Chubb will be featuring match updates from local non-league sides live on air, and also write up regular lengthy sport updates for our website – along with Leigh Bailey, whose mammoth reports at Billericay Town are so detailed I feel like I actually saw the whole game when I read them!

In addition to this Andy Gilson has put together a new team to host the fourth season of our popular Leyton Orient show The Orient Hour. Andy has put together a collection of podcasters, broadcasters, journalists and fans and the show often features the club owner Kent Teague who purchased the club 18 months ago and has overseen a resurgence in the club’s fortunes.

Many of our presenters are unexperienced when they join us but often go on to jobs elsewhere. Our last Orient show host Olly Buck did such a good job the club has poached him to front up their official content for this season. And Leigh has also joined Billericay Town’s offical TV channel too.

And as a West Ham supporter we shouldn’t forget The West Ham Way which is also in its fourth season. It’s consistently been our highest-rated show since it started, with between 15,000 and 25,000 people downloading the show each week in addition to its hefty FM listenership as well as a big online audience which frequently crashes our server!

All of our shows can be heard live on 98FM or on catch-up at www.phoenixfm.com.

** Lots of non-sporting guests coming up on Phoenix FM over the next seven days too.

** Matt Everard from Billericay will be chatting to Stewart Pink about his Tuk Tuk road trip from Barry Island to Billericay on One 2 Three.

** Abby Knight will be chatting to Michelle Ward about the forthcoming Soul, Spirit & Wellbeing Festival on Eat My Brunch.

** There will also be live music in the studio from alightlefton, The Lightscopes and James CC. All of our forthcoming guests can be found on our website.