With no less than eight League fixtures in August, Billericay Town have the opportunity to move on quickly from a poor performance on the road and first defeat of the season at Chippenham Town. Also vanquished by West Country opposition, Welling’s stinging 0-3 home reverse against play-off hopefuls Bath City should provide no less motivation for the South London side to put things right on Tuesday evening at the Steel Stadium. 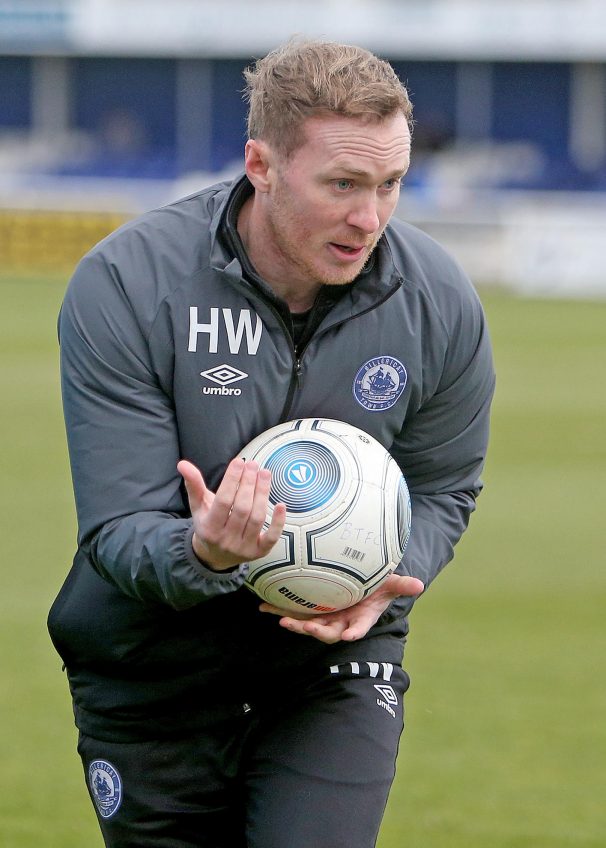 Harry Wheeler’s first game in charge on his return was the January meeting with Welling at the AGP. Courtesy: @nickyhayesphoto

With neither side averse to using the direct route in their strategies, a match-up of similar playing styles can be expected. Town have tended to switch formations during early fixtures to suit circumstances but may be tempted to begin with a standard 4-4-2 to meet head-on the likely default line-up currently favoured by Welling manager, Mark Goldberg. Any formation that signals the potential return of Blues favourite, creative midfielder Jack Paxman, into the starting X1 is likely to curry favour with home supporters.

Looking more deeply at the background to Welling’s 2019-20 campaign, the coming season has brought wholesale change at Park View Road with a new manager and coaching team replacing the outgoing Steve King and his assistants. Chairman, Mark Goldberg, is now back in charge of team affairs after a six month spell in the hot seat in 2016.

The last campaign proved to be highly successful, if ultimately frustrating, as the team fell short at the final hurdle in a narrow 1-0 defeat versus Woking. Having finished third in the table, maintaining late momentum despite a post-Xmas budget cut, and overcoming perennial play-off semi-finalists Chelmsford City in a thrilling 3-2 win, Welling more than met heady expectations held with the arrival of experienced campaigner, King, from Whitehawk.

This summer, apprehension at the scale of change, was moderated by respectable pre-season performances and an inflow of experienced players. The start to the League program has been reasonable bearing in mind a challenging set of opening fixtures. An honourable 1-1 draw at title favourites, Havant & Waterlooville, and a 1-0 home win against Kent rivals, Maidstone United, both plying their trade at step one last season, was nonetheless spoilt by a 0-3 home loss against Bath City. After three matches, the Wings are 12th in the rankings to Billericay’s 8th.

Player turnover has been high in South London with only three of those who started the final match of the season remaining at the club. Staying on are goalkeeper, Daniel Wilks, a 23 year old, England ‘C’ international. Diminutive striker, Bradley Goldberg, son of the Chairman, continues to offer an option up front, often pulling wide to create space for his strike partner, Adam Coombes.

Both central midfielder, Julian Anau, among the substitutes in the play-off final, and Canadian winger, Gavin McCallum, remain as Wings for the new campaign. Midfielder, Luke Rooney, formerly of Billericay Town, has secured a contract after featuring in games last December, and is a likely starter on Tuesday.

Two of Welling’s headline signings this summer will need no introduction to Billericay fans. Leaving Maidstone United, centre-back, Rob Swaine, a former Blues captain, he made 162 starts and scored 38 goals during his three spells with the Essex side. A real character, should he recover from a rumoured broken nose on Saturday, he will undoubtedly be sidling into the box at set pieces, hoping for the opportunity to celebrate a strike against his former employers. 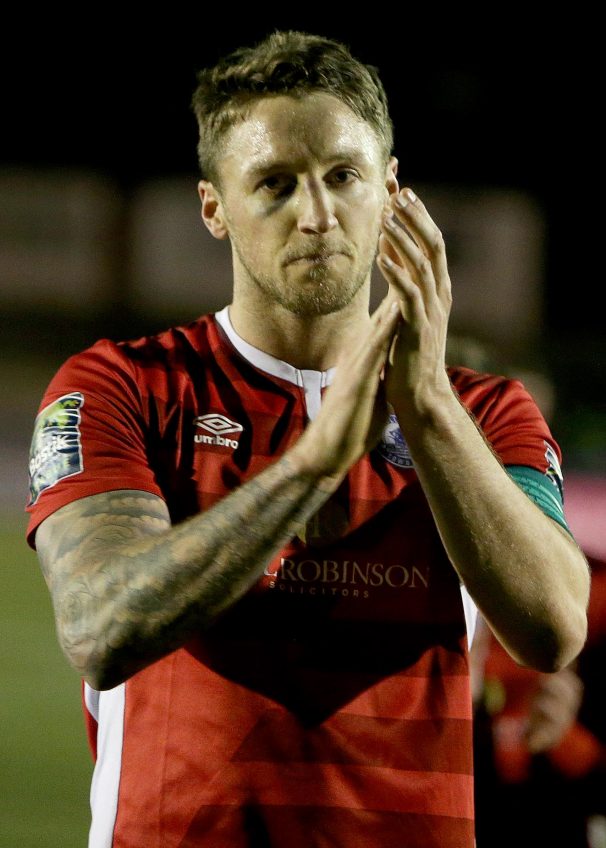 Centre-forward, Adam Coombes, also returns to his spiritual home for a third spell, having left Billericay at the end of last season. A prolific striker, with a unique ability from free-kicks, Coombes has already registered this campaign and, if service is good from midfield, is as close as any to a guarantee of 20 League goals. Who can be sure, with the immutable law of the ex-player bagging a goal, whether the Blues can keep him scoreless for the entire match? 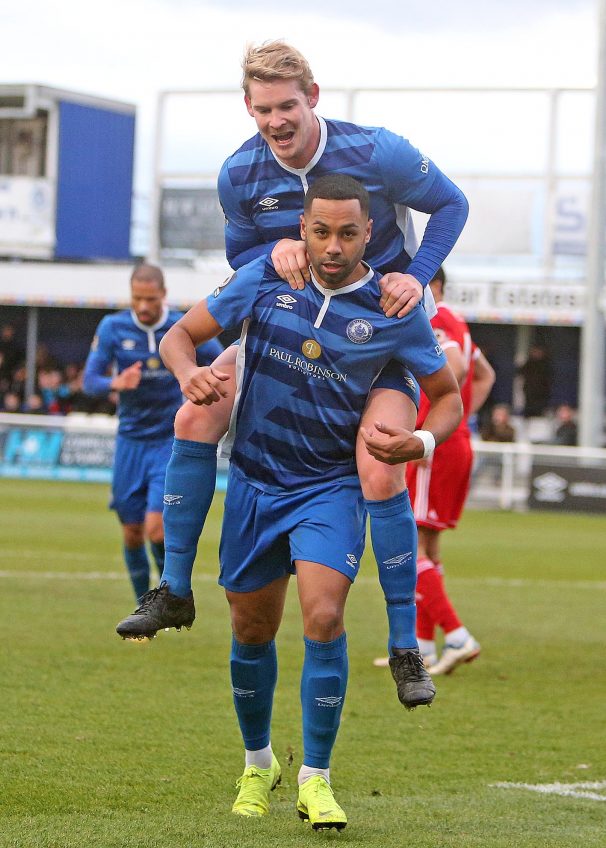 Adam Coombes celebrates scoring against Welling at the AGP in January. Courtesy: @nickyhayesphoto

Still on the Billericay theme, help up front is at hand from ex-Blue, Josh Oyinsan. At New Lodge in 2016 for a spell under manager, Craig Edwards. He hit top form at Cambridge City in 2018-19. With 17 goals in 33 games, the 6ft 5ins centre-forward, merits the chance of a step up of two divisions. Likely to be used from the bench at first as an impact player, should he appear, his other job – body double for Paul Pogba – should present little problem of recognition.

At this point, it is appropriate to bring up the two way traffic between Park View Road and Champion Hill. Outbound, combative midfielder, David Ijaha and striker, Danny Mills, head for the lure of match-day monkfish and full-time contracts. Heading in the opposite direction, left wing back/left winger, Nathan Green, well known to Blues’ Harry Wheeler from their Dagenham days, brings dynamism and crossing ability from his side of the pitch.

In midfield, with Ijaha now departed and the excellent Thierry Audel moving to Brackley Town, it is all change in the defensive/holding role. Goldberg has a number of options including, Connor Dymond, latterly of Isthmian Premier outfit, Margate, who missed the Bath defeat with a dead leg. Former Maidstone and East Thurrock United player, Reece Prestedge, is available against Billericay after completing a three match ban. He is likely to be in direct competition for a start in that position with centre-back Dquame Copeland, who impressed there as a substitute last time out and may get the nod.

Billericay’s central midfield should contain either ex-Wing Danny Waldren on defensive duties or, if fit, new signing, Doug Loft as a more traditional “holding” player. Should Billericay choose to use Paxman, we see the Essex side enjoying the advantage in the centre of the field. On paper, Billericay look to have the best attacking options in this area via the drive of Alfie Potter and willingness of Jordan Parkes to break the lines and shoot on sight. 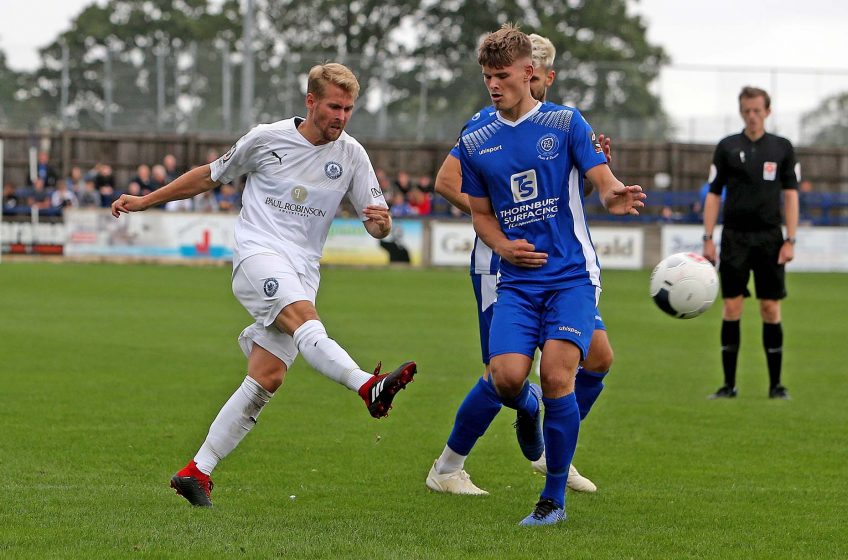 The Wings, however, look to have more width with the Dulwich pair, Cook, now available after a ban, and Green options to use wide right and left, respectively. We also see potential in Welling new boy, Aaron Cosgrave, arriving from Havant via Chelmsford City. He is lightning quick and adept at cutting in from the right hand side. A penetrating run, and first League goal from a tight angle against Maidstone, is an impressive calling card after a strong pre-season. His pace and willingness to drive in behind from wide on the right will be a challenge for a Billericay back-line not noted for its fleet of foot.

Welling have the look of a side that have made a good job of finding new recruits for departing players. Standout individuals such as right sided midfielder Brendan Kiernan, with 15 goals and 12 assists last season, and National South Team of the Season nominee, French left winger, Nassim L’Ghoul remain, however, major misses that cannot necessarily be fully replaced. With Experienced target man Danny Mills now at Champion Hill, new striking recruit Oyinsan will need to learn quickly and make the transition from step four football swiftly.

At the back, Swaine and Baghuelou look solid positionally with inevitable questions on whether pacy strikers will cause problems. Billericay’s centre forward Matt Rhead can be expected to provide either, or both, with the physical battle they relish. An alert Jake Robinson or Moses Emmanuel, both willing to run in behind from wide, could provide the key to unlock the Wings defensive padlock if midfield service provides the right pass. We see Charlie Wassmer and Ronnie Henry as the Blues’ defensive axis flanked by attacking left-back, Callum Kennedy and Ben Nunn, back in on the right side for Tambeson Eyong. 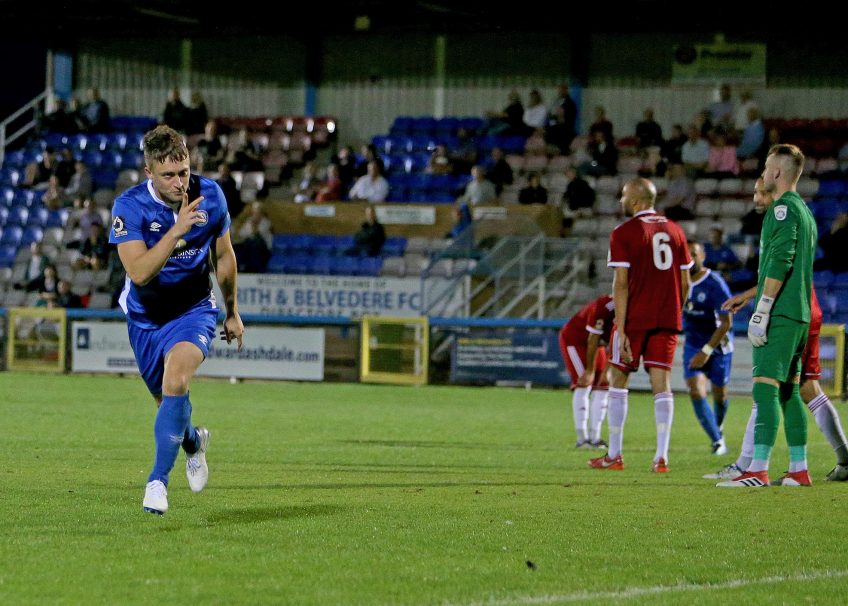 In terms of Welling’s outlook for the season, getting Coombes back to the club to provide the goals was vital and providing him with the right partner will be important in getting the best out of him. Equally, consistency levels out wide need to be maintained with individuals entrusted to fill the absences of Kiernan and L’Ghoul. The return of a fully fit Jack Jebb to central midfield is also a potential game-changer. Having suffered a cruciate injury last October, the creative player, and set piece specialist, is being slowly integrated back into the first team from the bench. This may take some time and Jebb is unlikely to feature on Tuesday.

With a strong home record likely to provide a good foundation, the lasting fitness of proven goalscorer Coombes and his partnership with either Goldberg or Oyinsan will be vital in making the difference during tight games. Welling appear to have the side to ensure that they achieve a comfortable top ten finish and are plausible play-off contenders. Overall, in my view, the quality of the team is slightly below that of last year and equalling the third position of that campaign will be stretching with Havant, Chelmsford, Billericay, Bath City, and possibly Maidstone United all likely to be challenging for the top three.

The game has a little extra spice with Billericay manager, Harry Wheeler, formerly the caretaker joint manager (with Tristan Lewis) at Welling for 19 matches before departing for Billericay in April 2017. The return to Essex of Coombes and Swaine will also bring added context. Wheeler has a good record against the Wings, recording a 0-3 away win last August and 2-0 win at the AGP in January 2019, with Coombes netting for the Blues in both matches. Another season, a different manager in charge at Welling, the fixture offers an intriguing match-up between two ambitious clubs firmly targeting the play-off’s.

Whilst the temptation is for Billericay to go direct and use the undoubted aerial ability of Rhead, the players at the club are more than good enough to efficiently execute a passing game. With one of the strongest available midfield’s in the club’s history at its disposal, and proven attacking talent at this level, the resources are there to ensure that the Blues win plenty of games this season.

Let’s hope for a return to form from the Blues on Tuesday.

Live match coverage from @btfcliveradio will also be available via the Billericay Town club app, free to download via google and apple.

Welling Danger Man: Adam Coombes
A prolific goal scorer and already off the mark against Havant. He’ll expect to hit 20 goals in a season and will be keen to get closer to that target by reminding the Billericay fans of his talent.

One other to Watch: Aaron Cosgrave
Very quick, dynamic presence on the right side of midfield. Off to a fine start with a cool finish versus Maidstone, he can be expected to be fed the ball regularly to test the Billericay defensive line.