BOWERS BEGIN LIFE IN STEP 3 WITH A DRAW 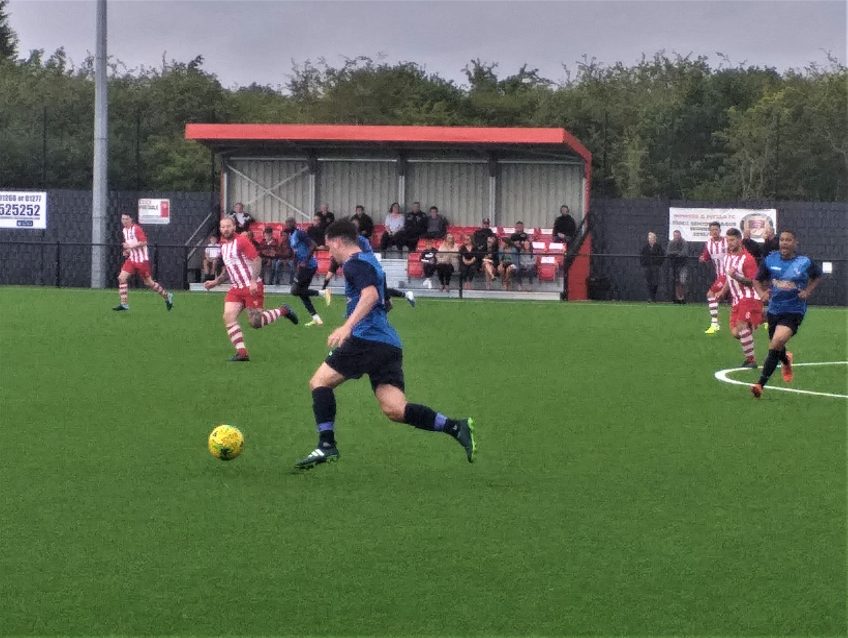 Bowers & Pitsea’s first ever match in the Isthmian Premier League ended with both sides sharing the honours, as they drew with visitors Wingate & Finchley.

Last season’s Isthmian North champions and their North London opponents both struggled to adapt to the blustery weather conditions in the early stages of the match. The first real chance of any sort fell to Wingate’s Charlie Cole in the 24th minute, when he had a close range effort on goal but Bowers goalkeeper Callum Chafer did a good job of blocking his shot with his feet.

Then on the half hour Sean Cronin had a shot for the visitors, which sailed just over the bar, and Cole once again forced Chafer into making a stop a few minutes later.

The Blues then took the lead in spectacular fashion on 36 minutes, when Olumide Oluwatimilehin hit a scorcher of a shot from 30 yards out into the roof of the net, to put his side 1-0 ahead.

But Bowers nearly equalised not long afterwards, when a right footed strike by David Knight rebounded off the outside of the left hand post.

And as the game approached half-time, Callum Leahy’s low effort was cleared off the line by Wingate defender Layne Eadie. 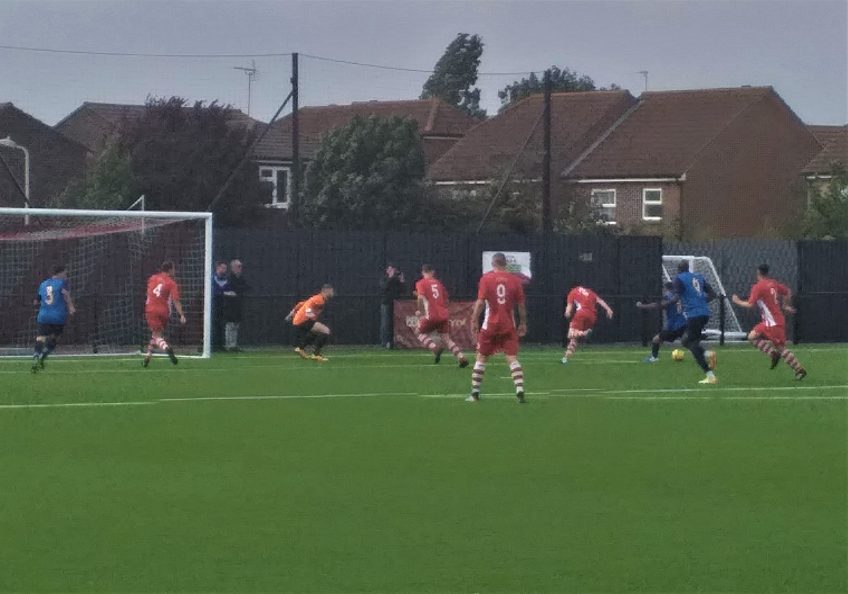 On 53 minutes Bowers had to make changes when after what looked like a nasty off the ball injury to Jamie Dicks, he and Dan Trendall made way for Tom Stephen and Quentin Monville, in a double substitution.

The first real opportunity of the second half came to the home side 10 minutes after the restart, as Bradley Warner had a chance but it wasn’t quite powerful enough to trouble Wingate’s experienced keeper Shane Gore.

Then just before the hour mark Bowers centre-half Kenzer Lee went close with a header, but Gore was once again alert to any danger.

But Rob Small’s side were back in it after 69 minutes, when Warner crossed for Knight who slotted the ball home to level the scores.

Knight had another effort on goal on 73 minutes, forcing an excellent stop from Gore which he tipped over the bar.

In the final few minutes of a rather feisty second period, the home team had two penalty appeals turned down by referee Karl Sear, much to the displeasure of some of the Bowers players and supporters who were convinced there had been two handball incidents inside the penalty area.

Then visiting centre-forward Marvin Morgan could have snatched it for his team when he broke free, but his shot sailed across the face of the goal and went wide.

So the teams ended up with a point apiece after what was probably a fair result.

After the match I spoke with Bowers & Pitsea manager Rob Small, who shared his thoughts on the game with me as can be seen here.