Billericay Town maintained their 100% record to start the season, overcoming Braintree Town 3-2 at Cressing Road. In an entertaining match, that show-cased the Blues attacking prowess and defensive frailties, they were dependent on a Matt Rhead penalty to haul themselves level after the Iron’s Tom Richardson opened the scoring with an early header. Second half strikes from Billericay’s Moses Emmanuel and Charlie Wassmer secured victory after another goal from Richardson had levelled.

Making only one change, Billericay brought in Tambeson Eyong at right-back for Ben Nunn after his impressive half hour as a substitute against Eastbourne Borough on Saturday. Braintree, having assembled an entire squad under Glenn Driver in only seven weeks, made a relatively muted three changes after bringing in 10 debutants for the opening match at Bath City. On came Rob Harvey at right wing-back for Emmanuel Folarin, 17 year old Jayden Gipson came in as third centre back, and winger Jason Banton replaced midfielder Sergio Manesio. Defender Josh Urquhart-McLeod was unsurprisingly left out of the Irons team for the fixture after his recent signing from Billericay. 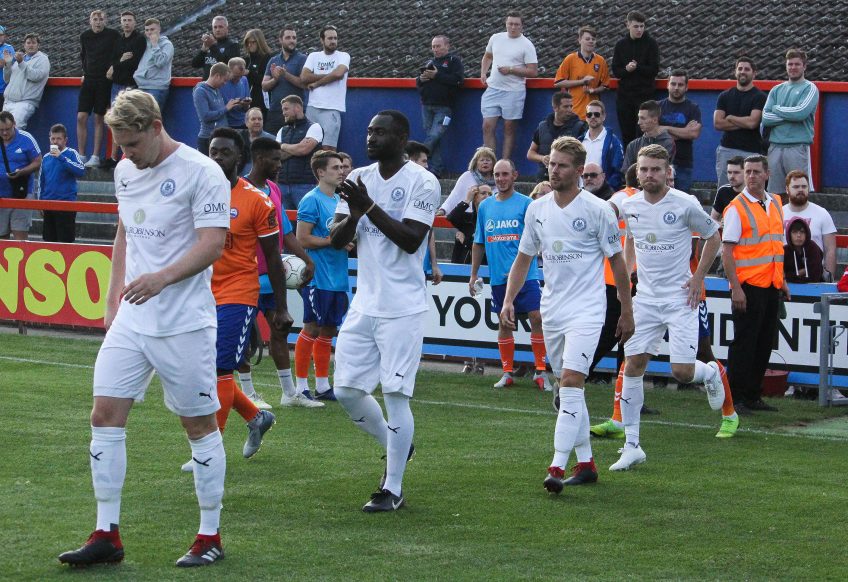 Billericay and Braintree Players Take to the Field. Courtesy: @photography_mjt

The Blues started the game by bringing into play the aerial ability of Rhead, their new, not so secret weapon. With Eyong and Alfie Potter combining on the right, an inviting cross was latched upon by The ex-Lincoln City man who put an early header wide under pressure from Gipson. Debutant, Rob Harvey, a young player of sufficient promise to earn a professional contract at Millwall, led the home side’s response after a powerful run down the right was ended illegally. The resultant set piece ended with Irons centre-back Jake Hutchings heading narrowly over the bar on 3 minutes.

With the visitors hesitant in the first ten minutes, and Braintree quick to counter-attack when retrieving possession, a swift break would see Harry Wheeler’s side fall behind. A burst down the left from wing-back Ollie Saunders saw the ball played to striker Femi Akinwande who let fly a fierce shot on goal. Repelling the effort into the air, Billericay’s goalkeeper, Alan Julian, could only watch on as in-form striker Richardson was first to react, nodding home the rebound in the 12th minute.

It could have got a lot worse two minutes later as a misdirected pass from the otherwise excellent Wassmer was intercepted by Braintree’s Jason Banton. With the ball fed to Ade Cole, a neat through pass saw Richardson race clear on goal. Racing out, Julian once again proved to be the man needed in a crisis, spreading himself quickly to save with his legs.

It proved to be a turning point as the Blues were awarded a penalty soon after as Moses Emmanuel was bundled over in the box. With all the away fans packed into the stands expecting Jake Robinson to blast home his second goal of the season, Rhead took the ball to slide home the spot-kick and equalise on 17 minutes. 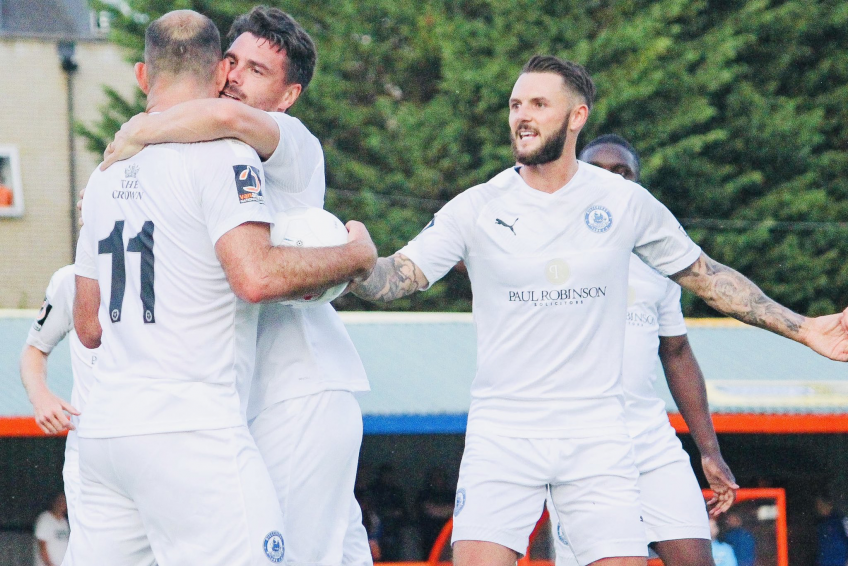 As the half progressed, the early pace of the match subsided and Billericay started to increase their influence on the game. Potter came more into proceedings and troubled the Braintree defence with his runs forward. Fouled by Michael Clark, Callum Kennedy’s free-kick was deflected just over by the Braintree wall. From the resulting corner, Wassmer’s header brought a high quality reaction save from Michael Johnson. On 40 minutes, Jordan Parkes showed us his Blues pre-season form, collecting the ball from Danny Waldren, to send a vicious drive from range that demanded a fingertip save from Johnson.

The visitors started the second period strongly and, but for a dramatic last ditch clearance from Braintree’s centre-back Michael Clark, would have taken the lead after Emmanuel showed a deft touch to take down Parkes pass and dink the ball over Johnson. With both sides looking dangerous in a game of attack followed by counter-attack, Billericay took the lead on the hour after a Callum Kennedy cross from the left was not dealt with by Johnson, allowing Emmanuel to nod home from close range. 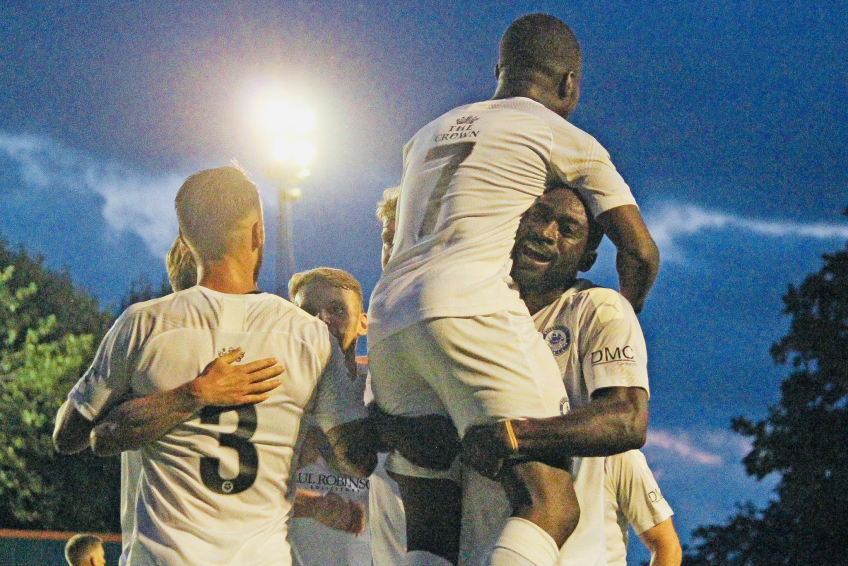 Just two minutes later, the Irons roared back to equalise as Ollie Saunders picked up an unclaimed Rhead flick, advanced, and crossed to the far post. With limited space, Richardson, enjoying an impressive start to his step two career, manoeuvred the ball over Julian and into the opposite side of the goal with a perfectly judged looping header for his second strike of the match.

Somehow, Billericay would haul themselves back into the lead in a clever piece of thinking from Parkes. Assuming corner duties as an alternative to Kennedy, he sent in a perfect outswinger that Wassmer met with a towering header into the net as he climbed high above his marker, Hutchings, on 72 minutes. In response, Braintree rang the changes, sending on strikers Alfie Cerulli and Adam Mills in place of Saunders and Bonnett-Johnson. With Ronnie Henry and Wassmer heading away danger, and Braintree limited to a harmless shot from Mills, the Blues held on for the three points. 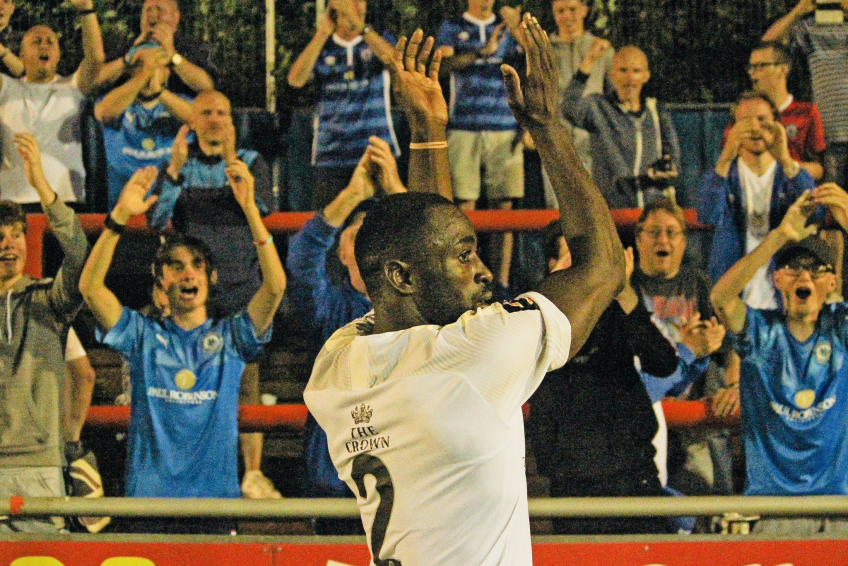 With Blues sitting joint top of the League after two games on maximum points, there is nothing to complain about in terms of the end result. Most will acknowledge that the team can play at a much higher level and produce better performances than present. Getting the blend right remains a work in progress with plenty of games to get into good habits. And so, it is on to Chippenham at the week-end for the toughest test of the season so far.

Billericay Town Live Radio Star Man @btfcliveradio
**Charlie WASSMER** – Outstanding at the back under immense pressure and scored the winner with a thumping header. Unlucky not to get another goal forcing a fine save from Johnson.