Billericay Town kicked off their pre-season friendly schedule with a 3-1 victory over a Mark Wright All-Star X1 comprising a number of ex-professional footballers and celebrities.  First half goals for the Blues from Jake Robinson, Adam Cunnington, and Jordan Parkes secured victory. A number of changes after the break, which included the arrival of three Blues trialists, lowered the tempo allowing ex-Liverpool and Fulham star, Danny Murphy, to pull a goal back for the visitors in the second period. 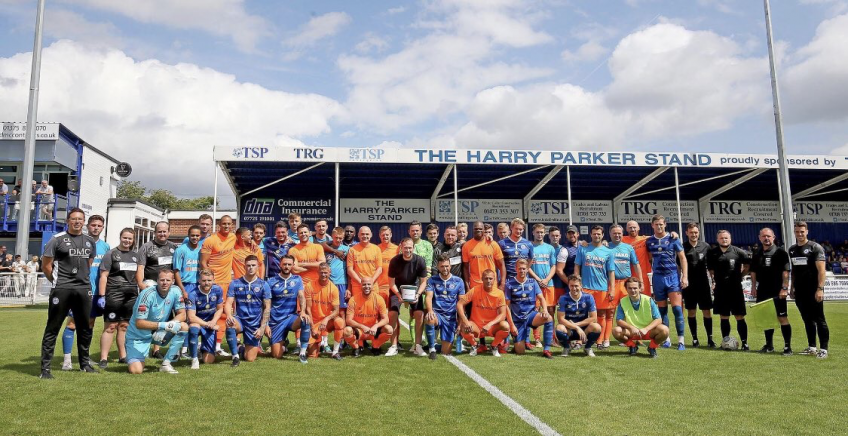 After 70 days of separation, the weather smiled on Billericay fans whose outlook on being reunited with football was as sunny as the warm July Sunday afternoon.  The charity match, dedicated to the Justin Edinburgh Foundation, provided an opportunity to catch the first glimpse in action of new Billericay signings. These included midfielder, Jordan Parkes, former Stevenage defender, Ronnie Henry, and new right back, Ben Nunn. Returning treble winner, Josh Urquhart-McLeod, the first arrival of the summer, announced to great fanfare by the club, was also on display at centre-back.

With more critical tests ahead – a match on Tuesday night will bring the Southend United “first” X1 – the focus today was on improving fitness levels and accommodating new players within the team. The Blues first half starting line-up, which lacked the injured Sam Deering and Moses Emmanuel, contained one trialist in central midfield. Besides back-up right back, Tambeson Eyong, the team comprised plausible regular first teamers in centre-back pairing, Charlie Wassmer  alongside Henry, Callum Kennedy at left back, and a midfield trio of Parkes, Jack Paxman, and Alfie Potter. The familiar partnership of Cunnington and Robinson accounted for the attacking positions.

With no team-sheets available, identifying all the individual All-Stars was tricky. However, there were some familiar faces brought along by Wright to entertain the crowd. Ex-West Ham United striker Marlon Harewood, former Spurs and Fulham star, Bobby Zamora, ex-Reading and Fulham midfielder, Steve Sidwell, ex-West Ham United centre-back James Collins, ex Fulham and West Ham left back, and former Canvey Island man, Bertie Brayley all took the field for the All-Star’s. Ex Fulham, West Ham and Billericay Town left-back, Paul Konchesky, was another popular returnee. Wright himself, a capable player, looked more than useful at left-back and had the best All-Star effort with a vicious free-kick saved in the first half. 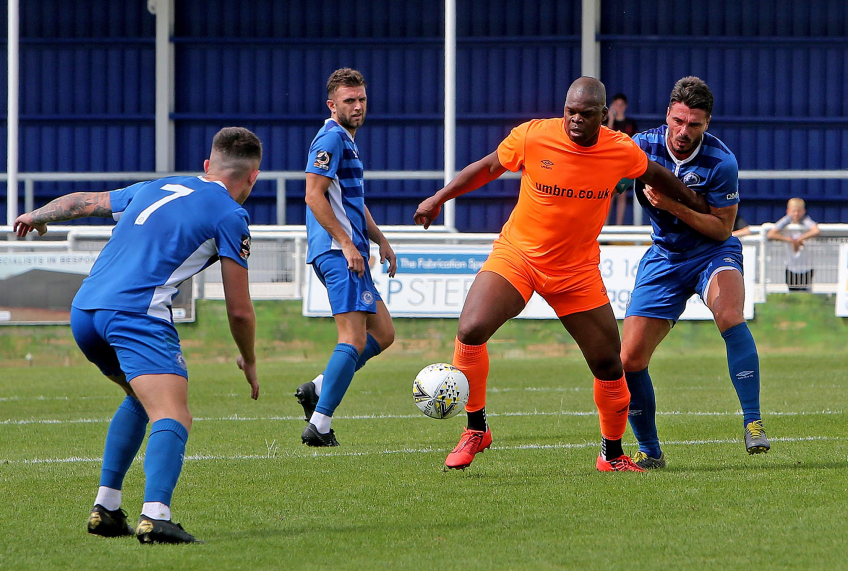 The game opened eventfully with Robinson reminding us that he still remains a potent force in front of goal. With the contest only 4 minutes old, cutting inside from the left hand side, he curled a magnificent effort into the top corner to open the scoring. Still with a pre-season to complete, he lacked a little sharpness drawing several fine saves from the All-Stars X1 goalkeeper when he could have perhaps added to his tally. With several examples of the Blues striker at his best on display, extra playing time should have him ready to deliver another strong season up front for the Blues.

An absentee from the Billericay side for most of the season after an ankle injury in early January away at Weston-super-Mare, fit again left back Kennedy resumed his buccaneering attacking forays against the All-Star’s. Storming forward, and delivering a number of high quality crosses during the 45 minute half he spent on the pitch, the ex-Wimbledon star set up the second goal with a flighted centre in the 10th minute. Finding space, Cunnington needed no second invitation to head home from close range.

Facing little attacking threat, Kennedy was clearly enjoying his afternoon and registered his second assist on 42 minutes with another left wing cross dispatched by a Parkes header. The ex-Hemel captain more than merited his goal after an impressive all action performance in the number 10 role. Dynamic, energetic, the fulcrum of the attacking intent within the Billericay midfield, he caught the eye of the home fans as early as the second minute with a long range strike that extended the All-Stars goalkeeper to dive full length to divert the strike onto his cross bar. Another howitzer shot from Parkes on the half-hour, after good work from Alfie Potter, also hit the bar. Constantly probing, Parkes looks highly likely to establish himself as a crowd favourite at New Lodge.

As is usually the case, half-time brought multiple changes as the Blues shuffled their pack, introducing the famous “A Trialist” in three positions; namely at left-back, at centre-back, and on the left wing. Former Dagenham captain Ben Nunn came on to play in his preferred right back role, the owner’s 16 year old son, Archie Tamplin, assumed a position on the right side of midfield, and Danny Waldren entered to patrol central midfield. Other changes including moving Eyong further forward into midfield, and bringing Urquhart-McLeod on to partner the trialist at centre-back. Julian, the goalkeeper, midfielder Potter, and striker Cunnington all continued as they started. 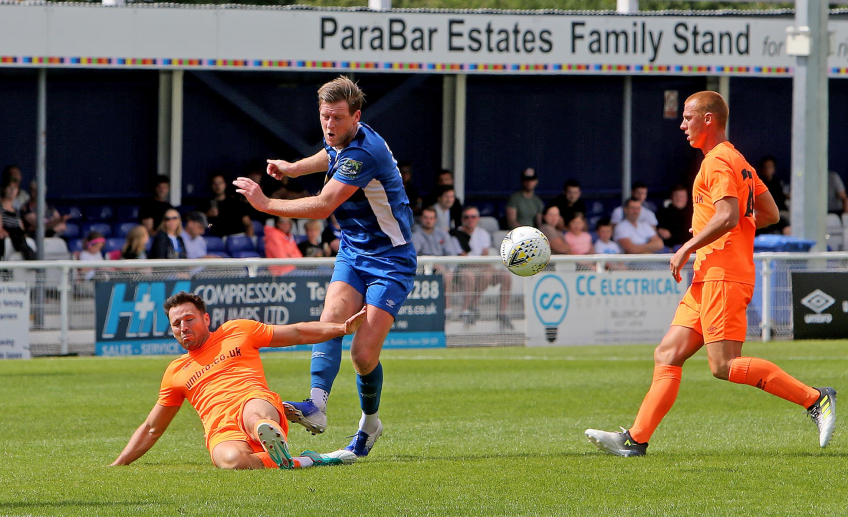 Lacking intensity, and with the changes marking a step down in overall quality, the All-Stars pulled a goal back through Match of the Day pundit, Murphy, who latched onto a through ball from F2 Freestyler and YouTube star, Jeremy Lynch. The ex-Premier League player, who provided a neat driven finish past Julian, will readily admit that speed is not his forte and his ability to reach the centrally placed ball without interception was not the finest piece of defending from the makeshift second half Billericay back-line.

With no more goals to note, the main points of interest before the final whistle were the return on 65 minutes of Paxman and Robinson, substituted at the break, for Cunnington and Potter. Paxman injected extra quality into midfield and looks an even better acquisition with every appearance. With no current back-up goal-keeper, Julian ceded his place to ‘A Trialist” on 76 minutes who pulled off one excellent save with minutes remaining.

An enjoyable match, that started strongly but petered out in the second period, the game provided a chance for players to get some early pre-season minutes. It also had the not inconsequential bonus of raising money for a very worthy cause – the Justin Edinburgh Foundation. Set up in honour of the ex-Billericay manager, who sadly passed away recently at the tender age of 49 years, Billericay Town FC has contributed in its own manner through football to respect the memory of a former player and manager. 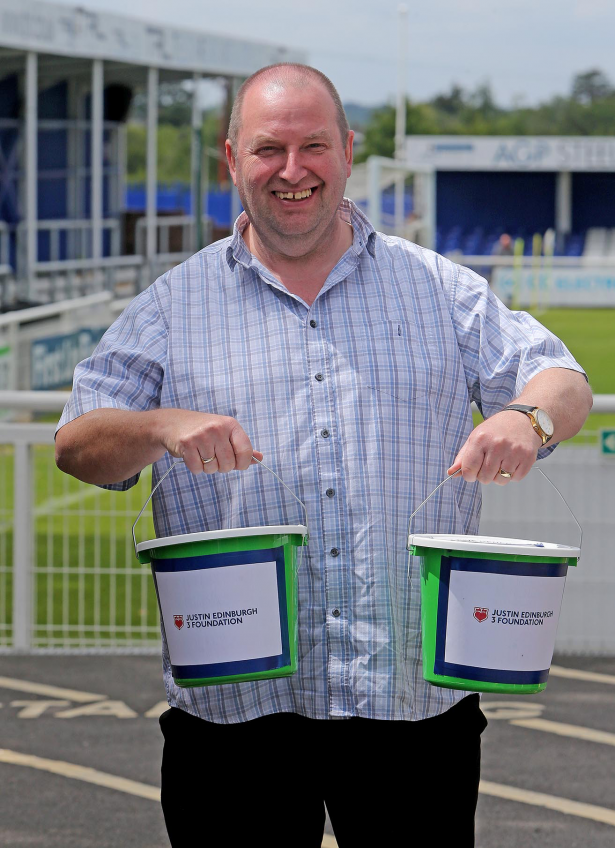 So, it’s on to Tuesday night and a fixture under the lights versus League One side, Southend United. At face value, this could be the club’s toughest friendly before the match-up with National league side Boreham Wood towards the end of the month. With a bumper house expected, it’s a game not to be missed for those following the Blues.

Alan Julian, 7, Goalkeeper – Nothis busiest afternoon.Dealt competently with what came his way and had no chance with the well-placed Murphy finish.

Tambeson Eyong, 6, Right-back – Rarely got forward but secure at the back. Occasional wild challenge with a free kick on the edge of the penalty area conceded.

Ronnie Henry, 7 Centre-Back– Composed in the back-line, used the ball well to start attacks through to midfield. Not overly tested but looks a leader and secure at back.

Alfie Potter, 7, Midfield– A willing runner & full of energy, burst forward from the right side and tackled back well. A good team player but needs to add goals to his game.

Jack Paxman, 8, Attacking Midfield– A real threat in the attacking third, comfortable running with the ball, going past opposition players, and shot on goal from range.

A Trialist, 6, Defensive Midfield – Chased and harried and did his defensive work. Need another look at Southend but didn’t shine in particular in central midfield.

Jordan Parkes, 9, STAR MAN, Attacking Midfield – Impressive debut, ran the show in midfield popping up across the pitch, devastating shot rattling the cross bar from range twice in the first half. Deservedly netted but surprisingly with his head. A talent.

Jake Robinson, 7 Striker– Took his goal well and showed glimpses of his best moments. A fully sharp Robinson would have had the match ball by half-time.

Adam Cunnington, 7, Striker– Looked a threat before tiring in the second half. Took his headed goal well and always a danger from the flighted ball. Played 65 minutes.

Second Half (listed by position):