Howzat for a new cricket team!

Written by Paul Golder in In The Papers👁 575 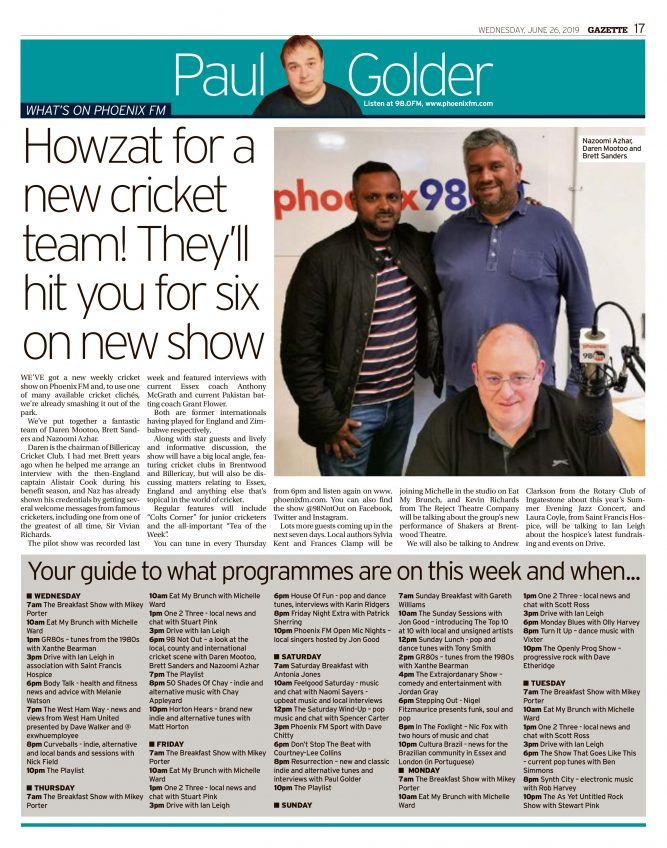 We’ve got a new weekly cricket show on Phoenix FM and – to use one of many available cricket cliches – we’re already smashing it out of the park!

We’ve put together a fantastic team of Daren Mootoo, Brett Sanders and Nazoomi Azhar. Daren is chairman of Billericay cricket club; I had met Brett years ago when he helped me arrange an interview with the then-England captain Alistair Cook during his benefit season. And Naz has already shown his credentials by getting several welcome messages from famous cricketers including one from one of the greatest of all time, Sir Vivian Richards!

Along with star guests and lively and informative discussion, the show will have a big local angle, featuring cricket clubs in Brentwood and Billericay, but will also be discussing matters relating to Essex, England and anything else that’s topical in the world of cricket.

Regular features will include “Colts Corner” for junior cricketers and the all-important “Tea of the Week”.

** Lots more guests coming up in the next seven days. Local authors Sylvia Kent and Frances Clamp will be joining Michelle in the studio on Eat My Brunch, and Kevin Richards from The Reject Theatre Company will be talking about the group’s new performance of Shakers at Brentwood Theatre.

** We will also be talking to Andrew Clarkson from the Rotary Club of Ingatestone about this year’s Summer Evening Jazz Concert, and Laura Coyle from Saint Francis Hospice will be talking to Ian Leigh about the Hospice’s latest fundraising and events on Drive.