Written by Paul Golder in In The Papers👁 828 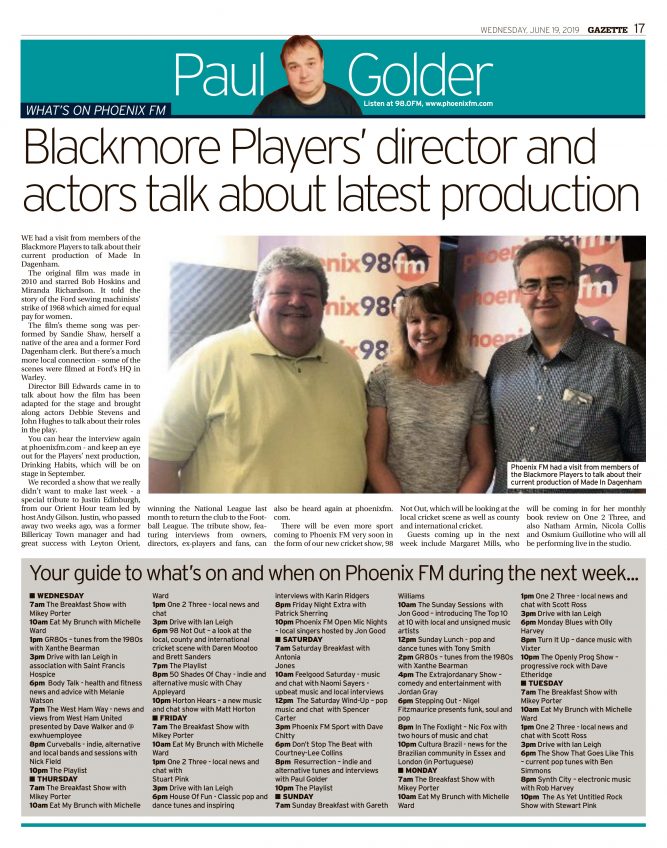 We had a visit from members of the Blackmore Players to talk about their current production of Made In Dagenham.

The original film was made in 2010 and starred Bob Hoskins and Miranda Richardson. It told the story of the Ford sewing machinists strike of 1968 that aimed for equal pay for women.

The film’s theme song was performed by Sandie Shaw, herself a native of the area and a former Ford Dagenham clerk. But there’s a much more local connection – some of the scenes were filmed at Ford’s HQ in Warley.

Director Bill Edwards came in to talk about how the film has been adapted for the stage and brought along actors Debbie Stevens and John Hughes to talk about their roles in the play.

You can hear the interview again at phoenixfm.com – and keep an eye out for the Players’ next production, Drinking Habits, which will be on stage in September.

** We recorded a show that we really didn’t want to make last week – a special tribute to Justin Edinburgh, from our Orient Hour team led by host Andy Gilson. Justin, who passed away two weeks ago, was a former Billericay Town manager and had great success with Leyton Orient, winning the National League last month to return the club to the Football League. The tribute show, featuring interviews from owners, directors, ex-players and fans, can also be heard again at phoenixfm.com.

** There will be even more sport coming to Phoenix FM very soon in the form of our new cricket show, 98 Not Out, which will be looking at the local cricket scene as well as county and international cricket. More news on that soon!

** Guests coming up in the next week include Margaret Mills who will be coming in for her monthly book review on One 2 Three, and also Natham Armin, Nicola Collis and Osmium Guillotine who will all be performing live in the studio.