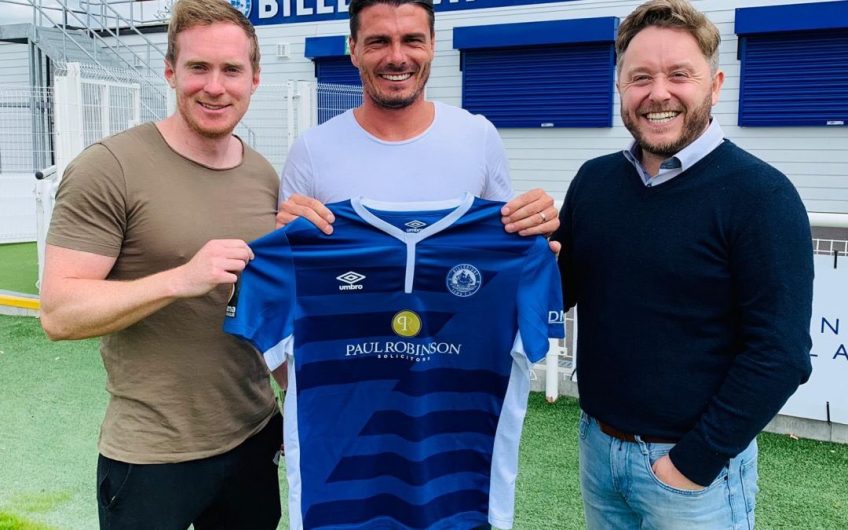 Having worked on the deal for the past month, manager Harry Wheeler was delighted to secure the signature of the defender. Highlighting his leadership skills, and title winning experience in the game as key factors, he expects Henry to be influential with a positive effect on and off the pitch:

“He’s a leader, he’s a great club man, he’s good for the environment of the dressing room……He’ll bring quality, League experience, and a nous on the pitch on how to win games.”

Best known for playing at right-back, Henry began his career as a centre-back. It is in this central defensive role that he is likely to be employed by Town and is expected to slot in to partner Charlie Wassmer. Former captain at Stevenage, and veteran of League Two, Henry brings strong leadership and organisational skills. He represents a welcome strengthening to the heart of the Blues’ back-line after the return of loanee, Paul Rooney, to parent club, Colchester United.

Henry was on the books of Premier League, Tottenham Hotspur, as a teenager. Unlike his namesake and grandfather, Ronnie Henry, who made 247 appearances and won an historic League Title and FA Cup Double in 1961 for the North London side, he was released in November 2003 without making a first team appearance. He joined then Conference Premier outfit Stevenage in January 2005 for what would be the start of a long association with the Hertfordshire club.

Initially signed by Graham Westley as a centre-back, Henry found himself converted to right back during his first stay in Hertfordshire, a role he fulfilled with distinction. Made captain in 2005, he was able to emulate his grandfather by winning silverware at Wembley, lifting the FA Trophy twice in 2007 and 2009. During a period of unparalleled success at Stevenage, culminating in a double promotion by 2011/12 to League One, he was named in the 2009/10 Conference Premier Team of the Year and was part of the back-line with the best defensive record in League Two in 2010/11.

In May 2012, Henry brought an end to a seven year spell, including 328 appearances, in Hertfordshire to join neighbours Luton Town, then in the Conference Premier. Named captain whilst at Kenilworth Road, two years at the Hatters brought another Conference Premier title win in 2013/14. In June 2014, the call of Stevenage proved too strong and, turning down a deal at Luton, he once more signed for manager, Graham Westley, and, aged 30, returned to Broadhall Way.

Five further seasons followed in League Two with Henry becoming the record appearance holder for Stevenage in January 2018. In his final season with the club, he was awarded the honour of a testimonial match in May 2019 before departing for a new challenge at Billericay Town.

We would like to welcome Ronnie to the Club and wish him every success.