Written by Stewart Pink in Drive👁 570


It was my last hurrah in the Drivetime hot seat and while the government sought a new leader, we elected our own cabinet – assigning celebrities to various cabinet roles. We named Michael Parkinson as Pensions Secretary, Anthony Joshua as Defence Secretary, Lewis Hamilton as Transport Secretary and put Steve McQueen in charge of exiting the European Union among some other gems that you can catch up with on my podcast.

We also had the monumental task of hosting the final of the One Hit Wonder World Cup. After we’d had a quick recap of the competition so far, the voting closed to reveal our two finalists. We bid farewell to “The Safety Dance” and “The Final Countdown” before Nena’s “99 Red Balloons” met “The One and Only” Chesney Hawkes in an epic final.

Then, we lit up the internet and even captured the attention of Chesney Hawkes himself as listeners took to Facebook, Twitter and email to cast their votes. The lead changed hands several times throughout the show and by the end, Chesney Hawkes had won the Twitter vote but Nena was victorious among the Facebook voters. Ultimately, as I totalled the final scores, the contest was so incredibly close that it all came down to a single vote!

With a very respectable 48% of the vote, Nena fans can hold their heads and balloons up high but, securing his place as the undisputed one and only, nobody, not even Nena, could take it away from Chesney Hawkes as we crowned him Phoenix FM’s One Hit Wonder World Cup Champion!

In a surprising turn of events, Chesney performs at the Brentwood Centre on Saturday 29th and Sunday 30th June in Godspell and naturally, a visit to the Phoenix FM studios to claim his prize and join us for a chat is very much on the cards!

If you missed it, I’ll be putting together a mix of the best bits from my Drivetime cover on my regular podcast. Just search “Stewart Pink” wherever you get your podcasts from and if you’re a fan of my shows then be sure to tune in for my regular hangouts – I present the As Yet Untitled Rock Show every Tuesday from 10pm and the One2Three show every Friday from 1pm. 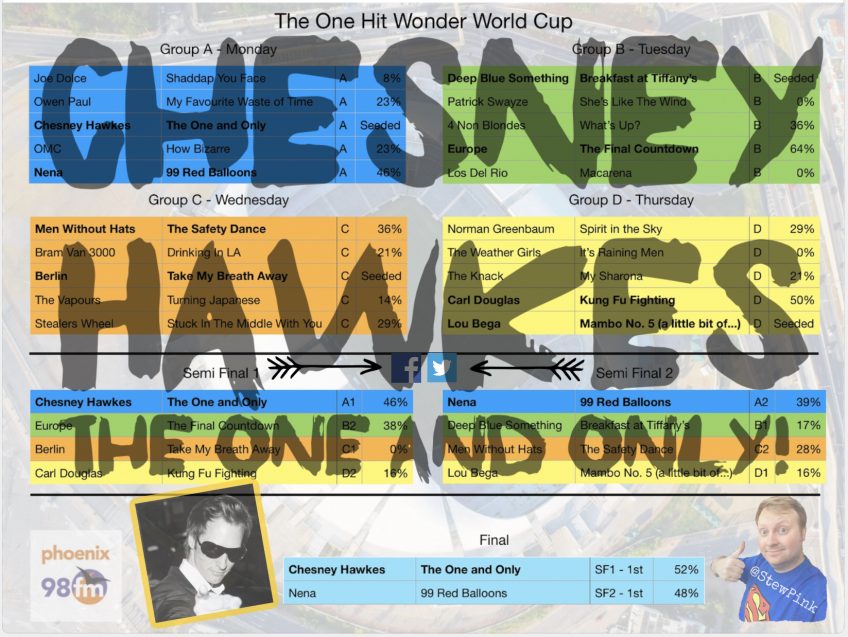