Written by Paul Golder in In The Papers👁 773 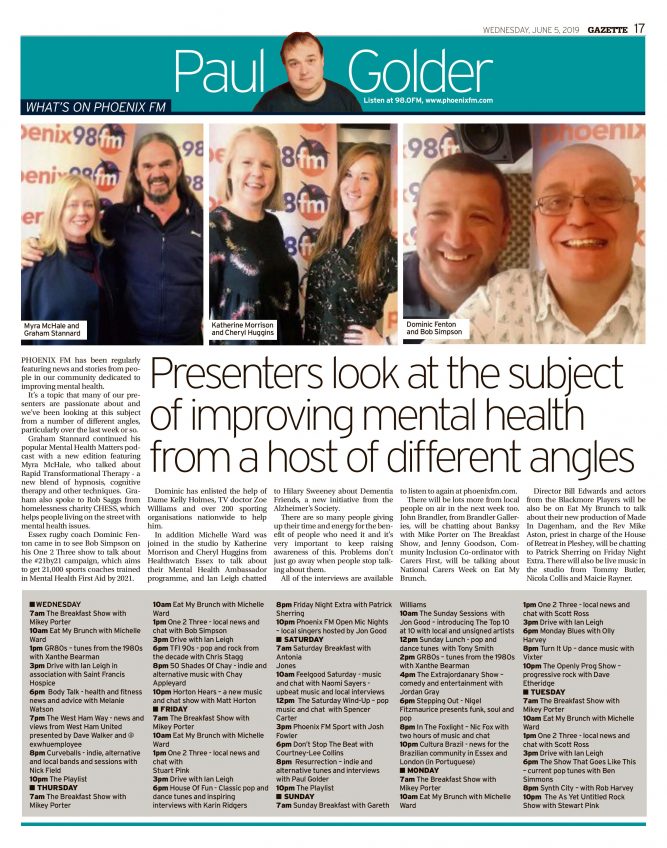 Phoenix FM has been regularly featuring news and stories from people in our community dedicated to improving mental health.

It’s a topic that many of our presenters are passionate about and we’ve been looking at this subject from a number of different angles, particularly over the last week or so.

Essex rugby coach Dominic Fenton came in to see Bob Simpson on his One 2 Three show to talk about the #21by21 campaign, which aims to get 21,000 sports coaches trained in Mental Health First Aid by 2021. Dominic has enlisted the help of Dame Kelly Holmes, TV doctor Zoe Williams and over 200 sporting organisations nationwider to help him.

In addition Michelle Ward was joined in the studio by Katherine Morrison and Cheryl Huggins from Healthwatch Essex to talk about their Mental Health Ambassador programme, and Ian Leigh chatted to Hilary Sweeney about Dementia Friends, a new initiative from the Alzheimer’s Society.

There are so many people giving up their time and energy for the benefit of people who need it and it’s very important to keep raising awareness of this – problems don’t just go away when people stop talking about them.

All of the interviews are available to listen to again at phoenixfm.com.

** There will be lots more from local people on air in the next week too. John Brandler from Brandler Galleries will be chatting about Banksy with Mike Porter on The Breakfast Show, and Jenny Goodson, Community Inclusion Co-ordinator with Carers First will be talking about National Carers Week on Eat My Brunch.

Director Bill Edwards and actors from the Blackmore Players will be also be on Eat My Brunch to talk about their new production of Made In Dagenham, and Rev Mike Aston, priest in charge of the House of Retreat in Pleshey will be chatting to Patrick Sherring on Friday Night Extra.

There will also be live music in the studio from Tommy Butler, Nicola Collis and Maicie Rayner.