From partying with Kylie to Pet Rescue

Written by Paul Golder in In The Papers👁 818 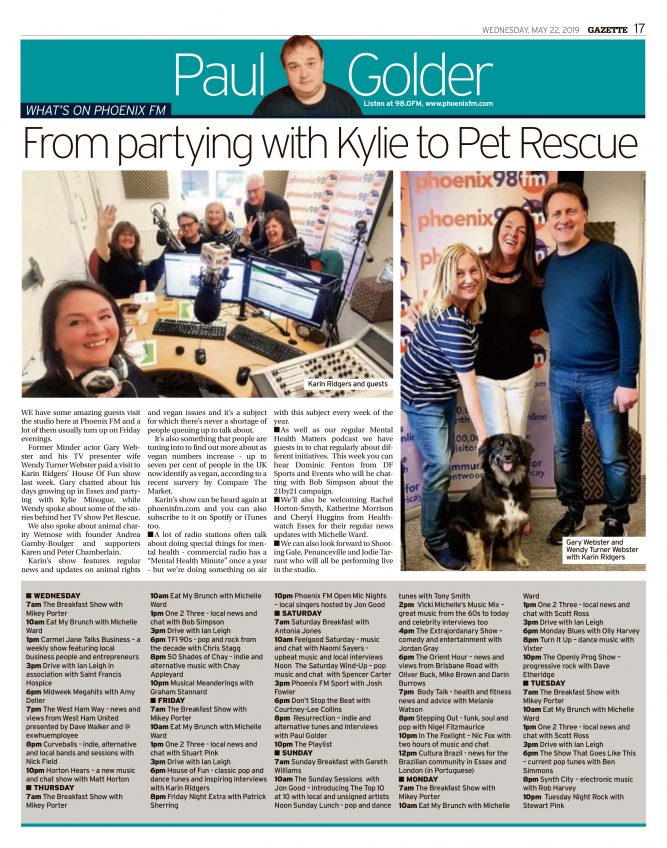 We have some amazing guests visit the studio here at Phoenix FM and a lot of them usually turn up on Friday evenings!

Former Minder actor Gary Webster and his TV presenter wife Wendy Turner Webster paid a visit to Karin Ridgers’ House Of Fun show last week. Gary chatted about his days growing up in Essex and partying with Kylie Minogue, while Wendy spoke about some of the stories behind her TV show Pet Rescue.

Karin’s show features regular news and updates on animal rights and vegan issues and it’s a subject for which there’s never a shortage of people queuing up to talk about.

It’s also something that people are tuning into to find out more about as vegan numbers increase – up to 7% of people in the UK now identify as vegan, according to a recent survery by Compare The Market.

Karin’s show can be heard again at phoenixfm.com and you can also subscribe to it on Spotify or iTunes too.

** A lot of radio stations often talk about doing special things for mental health – commercial radio has a “Mental Health Minute” once a year – but we’re doing something on air with this subject every week of the year.

As well as our regular Mental Health Matters podcast we have guests in to chat regularly about different initiatives. This week you can hear Dominic Fenton from DF Sports and Events who will be chatting with Bob Simpson about the 21by21 campaign.

And we can also look forward to Shooting Gale, Penanceville and Jodie Tarrant who will all be performing live in the studio.