Orient On Way Back To The Football League 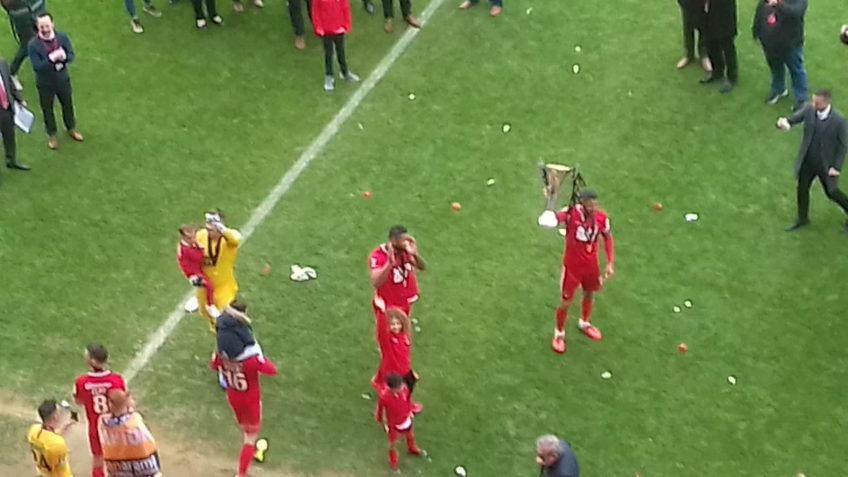 Leyton Orient are back in the Football League after finally managing to get themselves over the line to land the Vanarama National League Title, securing the point required to place them beyond reach of Salford City and Solihull Moors yesterday afternoon against Braintree Town.

The O’s kicked off and James Brophy immediately charged towards the Braintree goal, finally being tackled just outside the box. Marvin Ekpiteta had a shot blocked, with Macualey Bonne and Josh Koroma managing to get some runs going but found themselves kept under pretty tight guard by the Braintree defence. A better chance was created by Joe Widdowson who darted down the left flank, delivered a cross towards the back post but Ekpiteta and Turvey got in each other’s way and so neither made contact with the ball which floated away. In the 19th minute McAnuff had another dig, his shot spilled by Ben Killip, but the Iron ‘keeper made quick amends as he quickly smothered the ball.

Braintree Town may have been relegated already, but since their fate has been sealed they had gone on to have good form and were on a three game winning run coming into this game. They may have had nothing to play for except pride, but they were not going to lie down and allow the O’s to have a free ride to the points. They defended resolutely at times but also had a few sniffs at goal themselves, but they were to find the Orient defence equally solid and so as the half wore on goalmouth opportunities dried up.

Clay and Brophy both linked up and eked out another O’s opportunity in the 37th minute, taking on a number of defenders before the ball reached McAnuff whose shot was deflected away for a corner. Killip punched the resulting corner clear and the O’s had been frustrated once again. A Clay cross that was directed towards Bonne was then intercepted by Sven Keric. And it was to be Keric that had the final shot of the half, stepping up to fire a Braintree free kick over the bar.

The O’s fans started the second half in fine voice but there was to be little of note until the 53rd minute when Widdowson just failed to reach a deep Turley cross, then Brophy teased his was into Braintree’s box, delivering a cross from the byline that Killip managed to smoother.

The next O’s chance saw McAnuff back heel a ball to Turley who picked out Clay, but the resulting shot was cannoned high and wide of goal. The next ball into Braintree’s box was turned into the net by Bonne but it was ruled out for an offside. The O’s had enjoyed a good spell but then in the 61st minute Dean Brill was called into action, pulling off a good save to deny Andrew Eleftheriou at the back post. Dan Happe had to head away a Sogaf free kick soon afterwards.

With 20 minutes left to play news filtered through the Hartlepool United had equalised against Salford City. That raised a cheer from the O’s supporters and that seemed to act as a stirrup as good approach play from the O’s saw Koroma fire a shot that was cleared off the line. A further cheer went up when news filtered through that Hartlepool United had taken the lead against Salford City. It meant that the O’s were on their way back into the Football League if results stayed the way they were.

The O’s raised their game just once more as Koroma took on and beat a number of Braintree players but the ball was then played out to Turley who blazed his shot over. With Salford then falling further behind meant that the final stages of the game were played to a crescendo of noise as the O’s fans raised the volume levels. However Sogaf tried to spoil the party in the 85th minute but his shot was blocked by Brill. A final through ball to Bonne in stoppage time was halted by Killip who rushed out of his box to clear. A goal for Bonne would have capped off a fine season. But as it was the O’s needed just a point to get them over the line and they were able to do just that. You could put forward a valid argument that said that the game was not a classic by any means, it was a forgettable game on an otherwise memorable afternoon. At the final whistle fans poured onto the pitch, celebrating with the players. After they were cleared off Jobi McAnuff was then presented with the Vanarama National League trophy and with it the even bigger prize of automatic promotion back into the Football League.

Two years ago the O’s dropped out of the Football League and almost went out of business altogether. The first campaign in the 5th tier had seen the O’s slip dangerously close to the relegation zone. Justin Edinburgh’s first game in that season came at Solihull Moors and that 1-0 defeat to a fellow relegation battler showed him that at that stage he had his work cut out to keep the O’s in the Vanarama National League. He returned to Solihull Moors on Easter Monday and the point picked up their meant that Edinburgh now had to make sure his team did not blow the title on the final Saturday of the regular season.  The O’s did what was needed, avoiding defeat although admittedly it would have been so much sweeter had they won this final league game. That the O’s got back their Football League place after only two seasons in the Vanarama National League shows just how far the club have come in such a short space of time. With the first championship since 1970 now placed in the trophy cabinet means that the O’s have already had a magnificent season, but the double is still on and they now go on to face AFC Fylde in the FA Trophy Final on Sunday 19th May. That will be Orient’s last game as a non league club and AFC Fylde could well find themselves in the same position if they come through the play-offs. The main item on the agenda was always to get back into the Football League. With that accomplished means that maybe the O’s can now go on to capture the double, but this season  was all about getting back into the Football League and 8,241 people were at the Breyer Group Stadium yesterday to witness the O’s finally seal the deal.