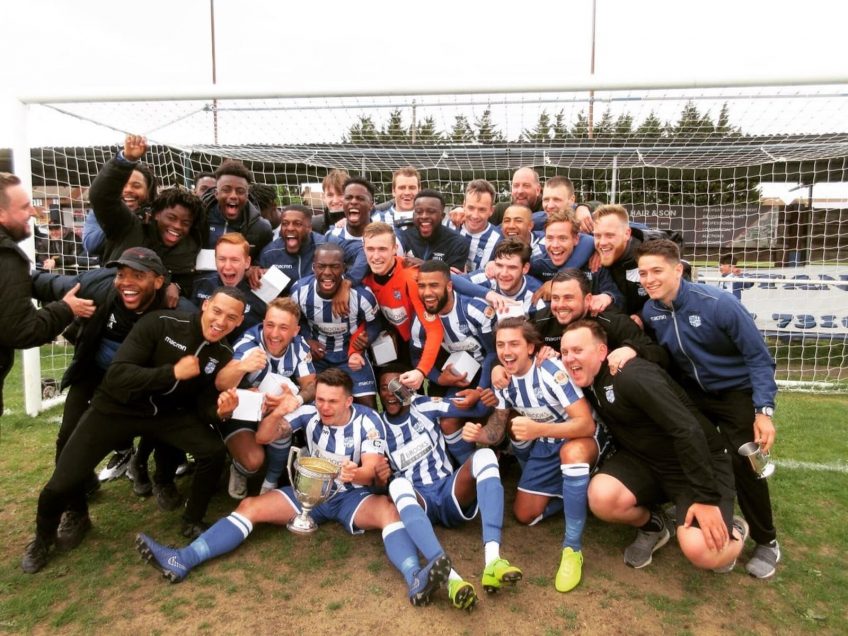 Hoddesdon Town ended their solid season in ninth after they defeated Barkingside 3-0 at Cricklefield.  This also turned out to be Alex Goldstone’s final game in charge for the hosts after he stepped down due to work commitments so the hosts will now be looking for a new manager to take them forward too.  Side, who finished the season in second bottom, now await their fate from the FA on whether they will play Step Five football next season.

The Tons ended Jonny Fowell’s reign as Clapton boss in style after they thrashed Sporting Bengal United at The Old Spotted Dog.  Brian Kyungu, Landre Vigo, Kirk McPherson, Ryan Reed, Giovanni Palmer, Greg Potts and Andy Greenslade all netted for the hosts who finish the season 11th, and Clapton also announced their new management team for next season which will be Glen Kendall, Halil Hassan and Paul Gissing.  For Sporting, who saw Yasir Rashid net, they finish a solid record-breaking season in 8th.

An Adebola Sotoyinbo brace in the final twenty minutes sealed the title and promotion to the Bostick League for Hullbridge Sports after they defeated Stanway Rovers in front of 419 at Lower Road.  Sotoyinbo netted the opener with twenty minutes remaining, slotting past Beeson to ease the tension that had been building, before he sealed the title and promotion with two minutes remaining when smashing home from eighteen yards.  Jordan Blackman did net a late consolation for Rovers, converting from Scott Kemp’s cross, but Sports were not to be denied and will be playing Step Four football next season.

Stansted knew they needed to win and hope Hullbridge slipped up at Lower Road to win the title and promotion to the Bostick League, but they could not hold up their side of the bargain and slipped to a shock defeat to bottom side Leyton Athletic at Wadham Lodge.  The Airportmen almost had the ideal start when they were awarded a penalty, but Callum Ibe missed from the spot after 11 minutes, and on the hour mark came the defining moment when Ike Izuchukwu netted the winner for the relegated hosts to see them leave Step Five football with a terrific victory.  It’s still been a great season for Stansted though, and a runners-up spot plus last weekend’s Gordon Brasted Memorial Trophy triumph, and with next weekend’s Errington Challenge Cup Final to come, it’s not been a bad season has it.

Woodford Town signed off a brilliant season with a 6th-placed finish after they defeated Saffron Walden Town at Catons Lane in front of another terrific crowd of 353 in North West Essex.  Andrea Mantovani put the visitors ahead on the half hour mark, but the hosts seemed to have rescued a point late on when Jamie Riley levelled.  Woodford were not to be denied though as Mohamed Al-Dani won the game for Woodford in stoppage time.  For Walden, they end a decent campaign in 4th.

Daryl Doolan netted the final goal for the Robins under the stewardship of Jon Watters after the manager of three years decided to step down after the final game to take on a new challenge.  He would have been happy with what he saw as they played well, although they could not win on the final day after Tyler Fowles netted for the visitors to make sure they took a point in their final match of the season.  Sawbo end the season third bottom, whilst Enfield end the season in 14th.

Stow ended a pretty decent campaign by hitting five past an in-form Southend Manor at Southchurch Park.  After Manor had struck the underside of the bar, Stow went in front in the 20th minute when James shot found Bishop to poke home, and it was two a couple of minutes later when a great ball from Gulliver found James who beat two before firing home.  And on 25 minutes it was three for the visitors as James netted from the spot after Crilley was taken out.  Manor did pull one back through Kye Jude two minutes before the break, but Manor then gave away another penalty on half time when Crilley was bundled over, and James slotted home for his first-half hat-trick.  And Stow managed to add a fifth in first half stoppage time when a corner fell to Gebrai whose effort was fumbled by the keeper, allowing Conway to rifle home the loose ball.  Manor saw Mo Kargbo net a penalty twenty minutes into the second period, but the damage had been done in the first period and saw Ryan Maxwell’s side end the season 3rd, whilst Manor end their season in 17th.

The Motormen ended their season in style after Dan Gilchrist netted five as Redbridge hit ten at The Recreation Ground against St Margaretsbury to set a new club record in the process.  Taylor Tombides netted a first-half hat-trick as the visitors held a 5-0 lead at the break, with an own goal and a Conor Okus goal making up the other goals, and then Gilchrist netted all five second half goals as they put the hosts to the sword.  The home side finish the season in 7th and have plenty of work to do in the summer, whilst Redbridge end a season of two halves in 12th.

An injury time penalty saw Takeley edge this contest at Station Road to end their season with a win that sees them finish fifth.  Andre Humphries gave the hosts the lead on the half hour before Josh Sykes added a second late in the half to see his side 2-0 up at the break.  Ilford though are made of tough stuff and saw Andre Embalo pull one back just before the hour mark before Billy Golledge levelled the contest with twenty minutes remaining, but they were denied a point when Nick Barrett struck home a penalty two minutes into stoppage time.  Ilford do finish the season in 10th though which is a good achievement for them.

West warmed up for the Errington Challenge Cup Final next weekend with a point in their final league game of the season against Tower Hamlets at Mayesbrook Park.  Hamlets took a 55th minute lead through Tyrees Morris, but the hosts levelled it up with just over fifteen minutes remaining when Michael Mignot found the corner with a special finish to make sure his side picked up something from the contest.  The hosts end the season in 13th whilst Hamlets finish 16th.