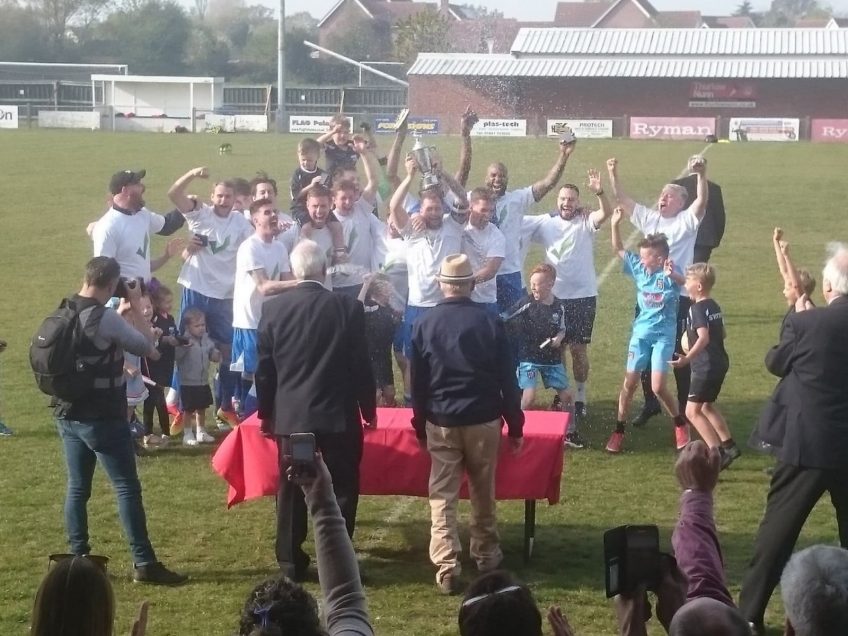 Stansted claimed the first of what they hope will be a treble winning campaign after an early Billy Coyne strike was enough to defeat St Margaretsbury at Leslie Field to win the Gordon Brasted Memorial Trophy for season 2018-19.

The Airportmen of course have a two more big weekend’s coming up as they go for title glory next weekend before another bank holiday final on May 6th in the shape of the Errington Challenge Cup final against West Essex, so this was a chance to begin a clean sweep of titles here.

For St Margaretsbury their season had been turned upside down after Max Mitchell left for Hertford Town, and with the bulk of the squad disappearing too, they had to rebuild, and have found the last few weeks tough to say the least., but this was a chance for them to at least finish the season with some silverware.

After a fifteen minutes delay due to an accident on the main road to Burnham, Stansted began the better and took a sixth minute lead when Coyne saw his corner sail straight into the far corner of the net and the favourites had the perfect start to this final.

Jack West then headed wide for Stansted before St Margs sent a long-range effort wide of the target, then back down the other end Callum Ibe hooked over the bar from an angle.

St Margs full back Tom Hayden then drove at the Stansted, cut inside, but sent a weak effort towards goal which Charlie Turner got down the save easily, and then Glenn Nightingale fired a long-range effort at Stansted’s goal, but Turner was right behind it to catch the effort.

Ibe should then have doubled Stansted’s lead after a defensive error presented him with a chance to head over a stranded keeper, but he chose not to do this and ended up firing wide of the target, and then there was almost another embarrassing moment between keeper and defender as with Ibe chasing them down, the defender touched back towards the keeper who had to improvise to scramble the ball clear, just.

And then a Coyne free-kick was parried out by Bailey straight into the path of Paul Clayton who slotted home the rebound, but the flag had gone up so the goal was ruled out, meaning the Airportmen had just a slender one goal lead at half time.

Jack Mitchell went close for Stansted early on in the second period, cutting inside but seeing his effort deflected just wide of the St Margs goal, before more Stansted chance saw Jack West swivel and strike at goal but see Bailey get down to save, and then an Ibe effort was brilliantly tipped wide by Bailey.

St Margs then fired a decent ball across the box but saw no one manage to get on the end of it, before Ibe then broke free for Stansted, was tackled well, but the ball broke free to Mitchell who could only slice wide of the target.

Kane Garwood, on as a second half substitute for St Margs, probably had the best chance for them when he got himself into a great position but his well struck left-footed effort was well saved by Turner, and it was a warning to Stansted that this was by no means over.

Stansted though were the side creating the chances in the main and saw Jordan Palmer hit straight at Bailey before they saw another effort blocked by their own player who was in an offside position to the flag went up to end that attack.

Ibe then almost sealed the contest but saw his close-range header brilliantly saved by Bailey, and from the resultant corner a header flicked on by a St Margs defender was cleared off the line, before Jack West then headed over another corner as that illusive killer second escaped the Airportmen.

Ibe then managed to break through tackles to get into the six-yard box but somehow poked wide from point blank range, the Stansted attacker will wonder how he hasn’t scored today but he had had a brilliant game apart from that and was a constant thorn in his opponents’ side.

Deep into stoppage time St Margaretsbury threw one last ball into the Stansted area in an attempt to force extra time, but another second half substitute Jayden Mitchell-Brown could not divert a header on target, and the game ended with Stansted taking the honours in what had been a very competitive contest.

One final footnote here, all the Stansted players wore special t-shirts during the celebrations in memory of joint manager Paul Pittock’s father who died a year ago today, so no doubt he would have been proud of his son and the team he manages.  One down, two to go now.