Billericay’s play-off hopes suffered a knock as the team slipped to defeat at Dartford FC, succumbing to a late double strike by substitute Tom Murphy. Having taken the lead in the second half through a Jake Robinson spot-kick, familiar defensive failings once again proved costly. The late horror show means that Blues must beat Bath City at home next Saturday to prolong their season into May.

The trip to Kent offered the travelling fans the chance to visit Princes Park, the award winning, purpose-built £7.0 million eco-stadium that has housed the Darts since its completion in 2006. Fittingly, the fixture took place on “Earth Day”, an annual event organised to support environmental protection. Constructed principally from treated timber, solar panels on the roof provide energy for under soil heating, floodlighting and hot water. Noting Kent’s susceptibility to drought, irrigation was a top priority in planning, with water run-off from the roofing channelled through pipes and gullies into two lakes. Collected rainwater supports self-sufficiency and is used for maintaining the pitch. 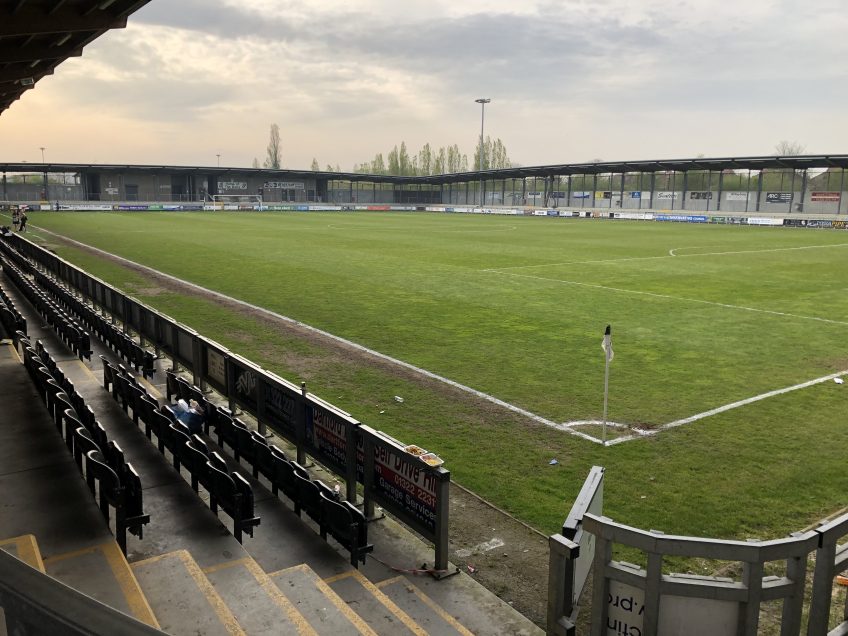 Dartford came to the match under a cloud after recent poor form had culminated in a 0-6 loss away on the 3G pitch at Eastbourne Borough in the previous fixture. In response, joint managers’ Jamie Coyle and Adam Flanagan elected to trust their players and look for a reaction rather than make wholesale changes. The usual 4-4-2 set up was preserved and, in acknowledgement of the makeshift front line that had been fielded on the South Coast, Charlie Sheringham and Darren McQueen were beckoned out of the treatment room to start up front in place of Andre Coker and Joe Healy.

On a sunny Bank Holiday Monday afternoon, Dartford FC turned up in play-off contender mode and started strongest, showing no ill effects from their South Coast dismantling. Back in comfortable surroundings to extend 13 years of service for the Darts, after a short spell at Concord Rangers ended last October, Ryan Hayes began with purpose. Perhaps less effective in front of goal nowadays, the 33 year old, with a record 108 strikes for the Kent side, still cut a dangerous figure on the right. On 2 minutes, he was unlucky not to record an early assist as a delightful flighted ball sent to the far post could only be headed wide of the target by left sided midfielder, Ben Greenhalgh.

Back after a troublesome ankle injury, on four minutes, Charlie Sheringham was the architect behind the next attacking move as Dartford went close again. Profiting from a Rooney miscontrol, the striker advanced on the right before feeding a useful looking through ball into the Billericay area. Latched onto by McQueen, the striker hit a low, powerful shot that was pushed away by goalkeeper, Mark Smith. Making the most of his opportunity when recalled to the side last Saturday for the suspended Alan Julian, Smith kept his place on merit and put in another commanding performance.

Billericay hit back through midfielder, Jack Paxman. With much expected of the ex-Maidstone United man, secured to add some creative sparkle to a workmanlike midfield, he did not disappoint. On 14 minutes, his free kick from 30 yards brought ex-Blues custodian, Louis Wells, into action with a smart tip over the bar. Moments later, the Darts goalkeeper would make an even better save, sprawling to the right to push out a Paxman drive after a short corner. Influential throughout, and showing a competitive streak to this game, the Billericay player’s drives forward often had to be halted by illegal means, with Hayes incurring the first yellow on 17 minutes for a foul. 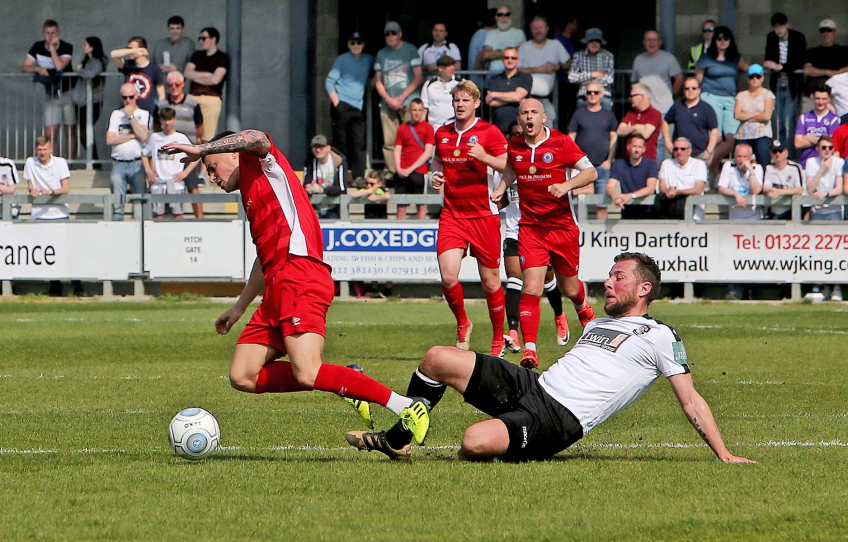 Billericay pressed again with Cunnington taking up dangerous positions in central areas as the obvious game-plan of launching balls on to the target man’s head was pursued. With Dartford centre-back Ronnie Vint adept at dealing with the aerial threat, a fascinating physical battle would unfold during the course of the match with quarter neither asked for nor given by either party. On 20 minutes, the Blues were nonetheless unlucky to have a strong penalty appeal refused as opposing defender, Tom Bonner, looked to have pulled the big Billericay striker down at a corner. 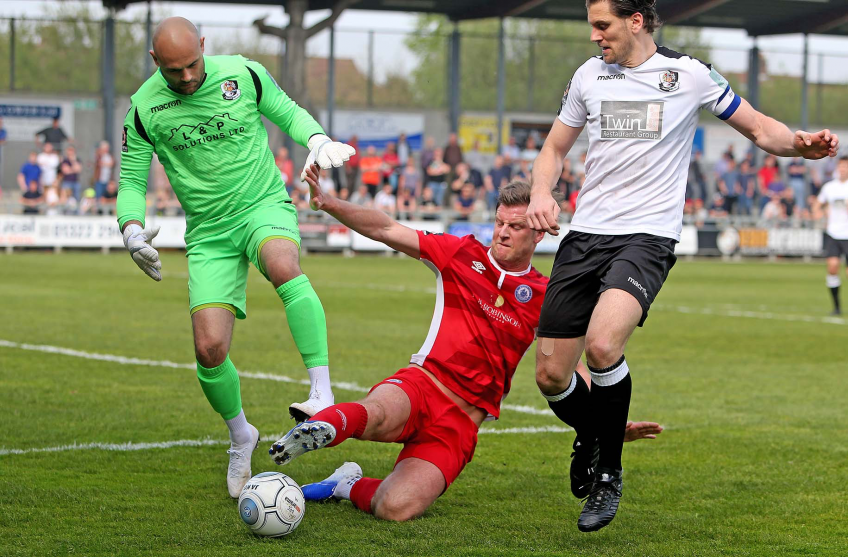 With both sides accumulating shots on target, the entertainment level for both sets of fans was first class. Next to try his luck, Darts inspirational midfielder, Lee Noble, wriggled free to send in a 21stminute curling shot that Smith had to tip over at full stretch. With so many chances conceded, Blues skipper Jake Howells used all his influence in his defensive midfield role to take responsibility for the ball and encourage the team to build passing combinations and preserve precious possession.

The chances kept coming with Dartford’s Hayes once more supplying McQueen. To the anger of the Billericay bench, the Darts striker had time to take down a high pass in the penalty area, swivel and fire off a shot. Only the close attention of Howells, who reacted quickly to block, prevented another shot on target. The first half closed with a moment of invention from Moses Emmanuel who collected a Rooney header to thread through a pass to Robinson. Galloping down the right, the Blues striker drove forward into space before firing a low, cross-shot marginally wide of the far post.

Billericay conceded a penalty soon after the break as central defender, Charlie Wassmer, was adjudged to have barged Sheringham over defending a high ball. Picking himself up after the foul, Darts leading scorer in the League, with 9 goals, did not advance to double figures. Hitting his 50thminute spot-kick too close to Smith, the goalkeeper dived to make a good save to his right.

It would prove to be costly as an infringement on Billericay’s Cunnington, hauled down by left back, Daniel Johnson, would see Billericay awarded a penalty of their own on 56 minutes. Having both scored and missed a penalty versus Dartford in the reverse fixture last September, Robinson would make no mistake this time around, scoring his first goal since his return to the club to take the lead. 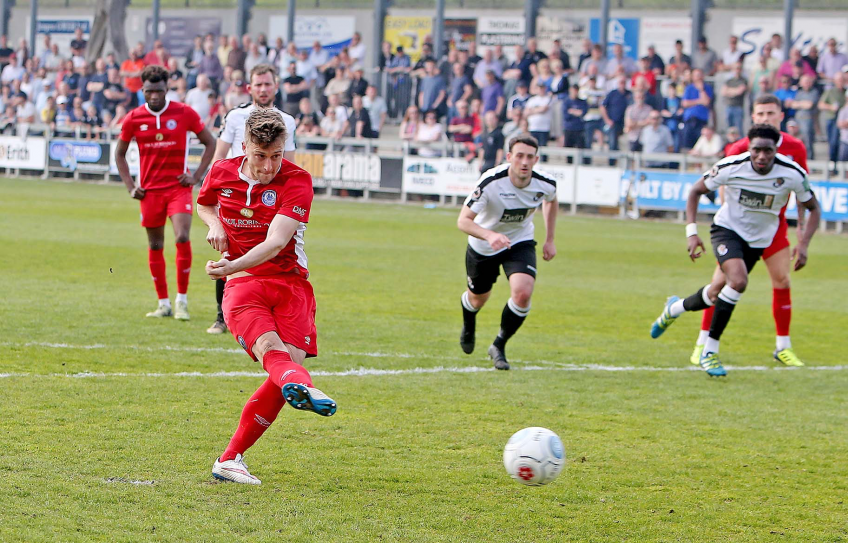 Moved centrally after the break, Robinson looked more comfortable after a somewhat peripheral first half spent negotiating lofted passes and chasing lost causes from wide positions. Soon after his goal, the Billericay front man was heavily involved in the next effort on goal. Taking possession of the ball, his pass wide to the overlapping Michee Efete saw a cross to Cunnington headed just over.

Visibly buoyed going ahead, Billericay’s momentum grew as a storming Joe Kizzi run from right back saw Robinson dive to head his centre high of the target on 68 minutes. With Dartford resorting to a series of high balls to get the break-through, the Billericay defence, with Wassmer prominent, comfortably dealt with the predictable threat. Seeking to come up with an alternative option, the Dartford dug out sent on Murphy and Coker for McQueen and Sheringham to revitalise the attack.

Notwithstanding Billericay’s obvious failing of conceding 10 League goals in the last five minutes of matches this campaign, Murphy and Coker would prove to be an inspired combination. On 88 minutes, Dartford equalised. Coker found space on the left side, delivering a cross into the Billericay box. Defender, Rooney, missed his clearance allowing the ball to travel to Murphy behind him. The Dartford substitute needed no second invitation, side-footing home powerfully at the back post. 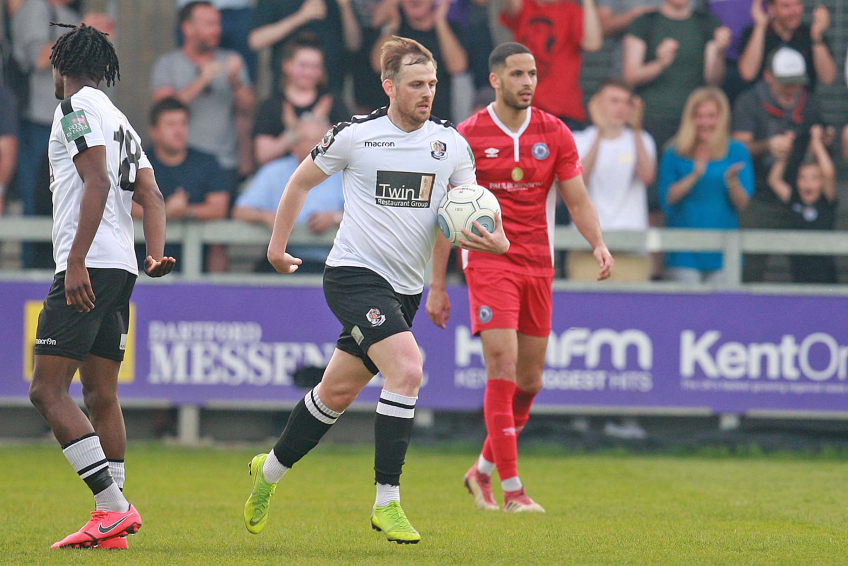 Tom Murphy dashes back to re-start game after his first goal. @nickyhayesphoto

It got worse for the Blues as Dartford scored again in added time once more through Murphy. Assisted by Greenhalgh, the striker had the freedom of the Billericay penalty area to receive the ball, turn, and hammer a low strike past Smith into the far corner for the winning goal. It was a bitter pill to swallow for the Essex faithful as the curse of the late goal, and defensive inadequacies, had seen the Blues throw away all three points in four fateful second half minutes. 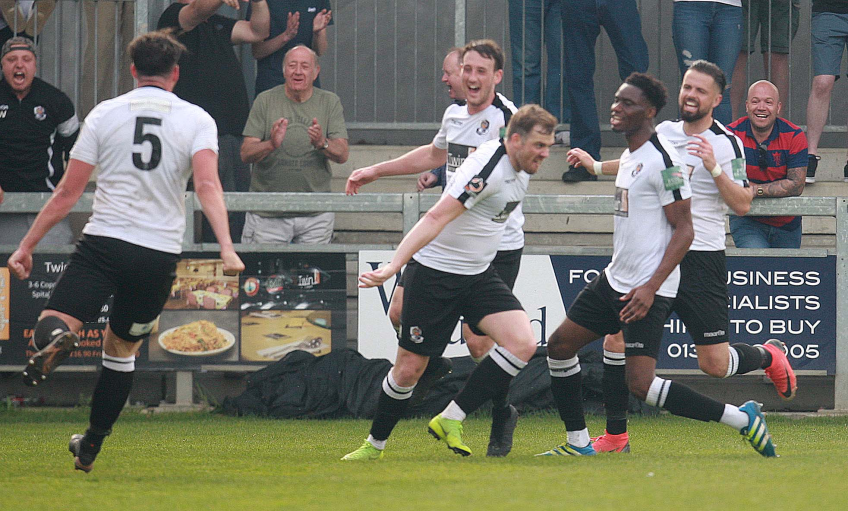 Thankfully, the season is not over and the destiny of 7thplaced Blues is in their hands. A win at home to Bath City, who have already qualified for the play-off’s, would secure a likely away tie on Wednesday 1stMay. With St. Albans City, Dartford, and Wealdstone occupying 8thto 10thplaces and all able to overhaul Billericay if only a draw is obtained, a win looks to be the only option.

Having encountered an eventful season, with a number of highs and lows, it is likely that fans will reflect on their good fortune to be heading to the last round of matches with something to play for. Don’t miss the action and make sure that you come down to the AGP to see the Blues try and secure their play-off spot. If you can’t make it, the game is available via the live radio commentary link on the club app staffed by the @btfclive radio team