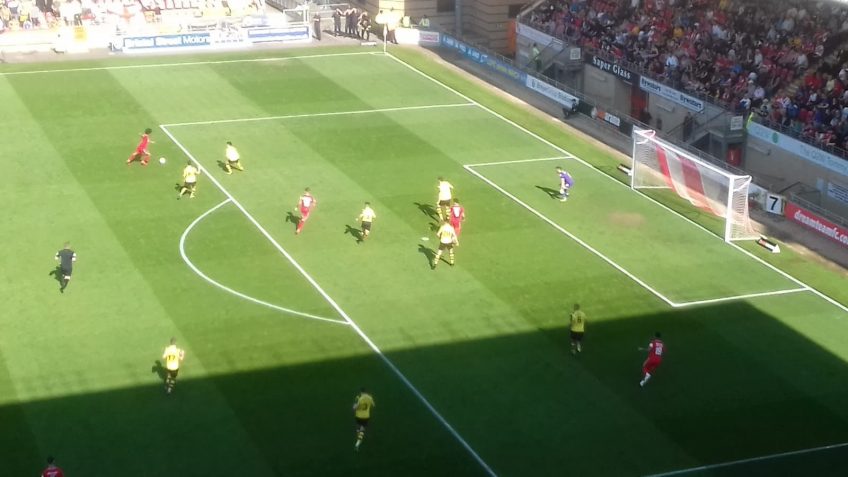 The O’s are on course to land the Vanarama National League title after securing all the points on an afternoon when their main rivals Salford City and Solihull Moors also picked up wins. Monday now sees the crunch game with Solihull Moors, but on Friday the O’s had to put aside the challenge from a Harrogate Town side that were homing in on a play off berth.

A bumper Good Friday crowd of 6,665 turned up at the Breyer Group Stadium and it took them only two minutes before they were off their seats cheering Orient’s opening goal. Orient’s initial attack saw Macauley Bonne have a shot saved by James Belshaw, but the Harrogate’s keeper’s parry fell kindly to Josh Koroma whose shot was then deflected away for a corner by Liam Kitching. The resulting headed was headed home by Josh Coulson to give the O’s a dream start.

But Harrogate picked themselves up and immediately went on the attack with Josh Falkingham having a shot knocked behind for a corner by Marvin Ekpiteta, which Jack Emmett went on to head wide. Falkingham was involved in Harrogate’s next attack, threading a ball into Orient’s box but Lloyd Kerry found himself crowded out by the O’s defence, which allowed Dean Brill to gather the ball comfortably.

With Harrogate being lively upfront meant that the O’s couldn’t rest on their laurels and Belshaw had to pull off saves to deny both Jordan Maguire-Drew and Jobi McAnuff. But Harrogate were able to play the ball around nicely at times, and from this they were able to carve out a few openings. Emmett dragged a long range shot wide, while Jordan Thewlis placed a header straight at Brill, then fired another shot wide.

However good approach play by Widdowson and Maguire-Drew ended up with Bonne poking home from close range. However Bonne was adjudged to have been offside, it meant the goal didn’t count and the O’s were still only one-goal to the good against a team that seemed to be growing into the game and didn’t seemed fazed at being a goal down to the league leaders. In the 33rd minute a pinpoint cross from Jack Senior was met by a Mark Beck header, but Brill was equal to it. And then two minutes a Senior free kick was delivered to the back post, Beck  the intended target, but Brill got to the ball first.

Harrogate’s defence had managed to keep the O’s front line quiet, but then three minutes before the break Falkingham ended a promising Orient move by fouling Maguire-Drew, which earned him a yellow card. However McAnuff free kick cleared the cross bar, while his next one soon afterwards was straight at Belshaw.

Harrogate nearly grabbed an equaliser in first half stoppage time, with Brill getting down low to tip away a Thewlis shot.

The second half saw the visitors win a corner inside the opening minute, with Emmett managing to slip into the O’s box and send over a cross that Happe knocked away. Then in the 53rd minute Koroma went on a mazy run that took him past a number of Harrogate players, but the final shot lacked direction and ended up with the fans behind the goal. But it was enough to lift the O’s fans who raised their voices in support of their team and as a result the O’s had a little spell of possession with Koroma twice laying off Bonne, who was foiled on both occasion by Kitching. Then Clay battled his way through the Harrogate midfield but then over hit his through ball to Bonne.

But it was to be Harrogate who then crafted the best chance of the game, with Thewlis taking the ball past Brill but then hitting the post with his close range shot, with Brophy then smashing the ball clear. By rights it looked like Thewlis had done all the hard work by beating Brill but luckily for the O’s his miss meant that they held on to their slender lead.

The O’s fans again took to vocal support and that lifted the team who went on another spell of pressure that won a number of corners, with Matt Harrold placing glancing header from one of them wide; then a McAnuff picked out Ekpiteta whose low shot was tipped round the left upright by Belshaw. The resulting corner bobbled around the Harrogate box until Howe thumped clear. And the O’s went close to extending their lead in the 83rd minute when a Brophy free kick was headed wide by Harrold.

There was another heart-in-mouth moment for the O’s when Thewlis has a shot hooked off the line by Coulson two minutes from time, and there were a few gasps of discontent when the fourth official indicated that there were to be five minutes of stoppage time. It meant the O’s had to hold on for just a little bit longer.

However that pressure was finally removed in the second minute of stoppage time when Harrold headed a Brophy corner past Belshaw, which not only made Brisbane Road erupt but also finally made sure the O’s got the full quota of points against a resolute Harrogate Town outfit.

The win keeps the O’s two points clear at the top of the National League table going into Monday’s crunch game against 3rd-placed Solihull Moors, before then ending the season at the Breyer Group Stadium against an already-relegated Braintree Town. It’s possibly one of the biggest weeks in the history of Leyton Orient, with the Vanarama National League title and with it promotion back into the Football League within their grasp.