Billericay ended their four game losing run with an exciting 2-2 draw at Dulwich Hamlet. It could have been so much better for the Blues but for a last gasp home equaliser courtesy of a Lloyd Doyley own goal. The visitors had raced into a two goal lead in the first half through Joe Kizzi’s far post header and a close range finish from Moses Emmanuel. Dulwich would not be denied their point and roared back into the match with an Akinyemi penalty before parity was restored in the 95th minute. 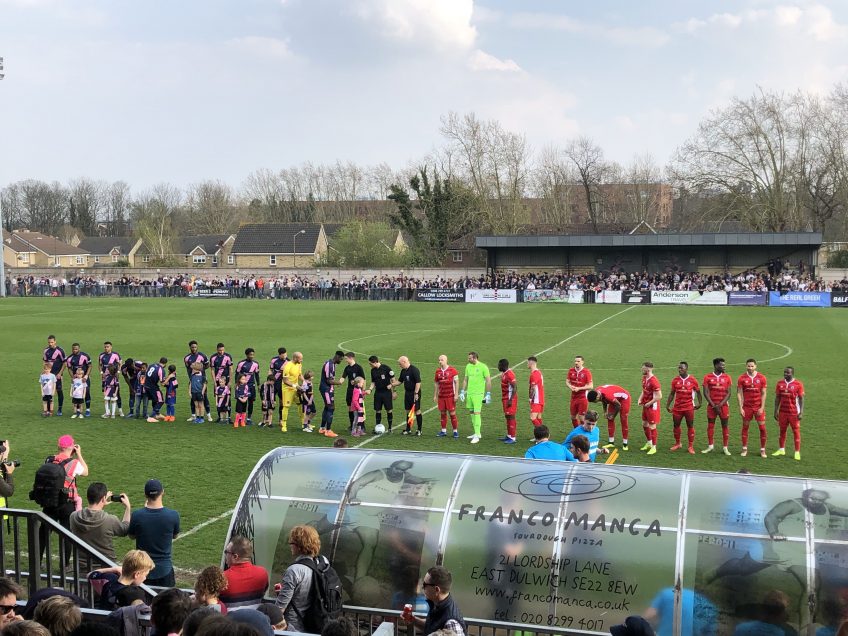 Teams lining up at Champion Hill

The trip to South London offered travelling fans the opportunity to visit the splendid Champion Hill, home of Dulwich Hamlet. Having returned to their natural residence on Boxing Day following nine months of exile after a dispute with landlords, Meadow Residential, the setting offered a fine backdrop for football. With a keen rivalry between the two sets of supporters fostered by a tense title campaign the previous season, and a dose of over-zealous cultural stereo-typing on both sides, this had the hall-marks of a “big game”. If the record attendance of 3,243 was anything to go by, the keenly anticipated meeting, and thrilling match, did nothing to disappoint those that came to watch.

Despite the disappointment of the Hungerford reverse at home last week, Billericay manager, Harry Wheeler, kept faith in his players and his preferred line-up of 4-2-3-1. Only one change was made with a first start for new arrival from Maidstone United, attacking midfielder, Jack Paxman. Making way, striker, Adam Coombes, continued his recovery from a knee complaint and dropped to the bench. Announced back at the club on Friday to the delight of the Billericay faithful, front-man, Adam Cunnington, took his place as substitute. Still unavailable through suspension, usual first choice players Jake Robinson, and central defender, Charlie Wassmer, sat out proceedings. 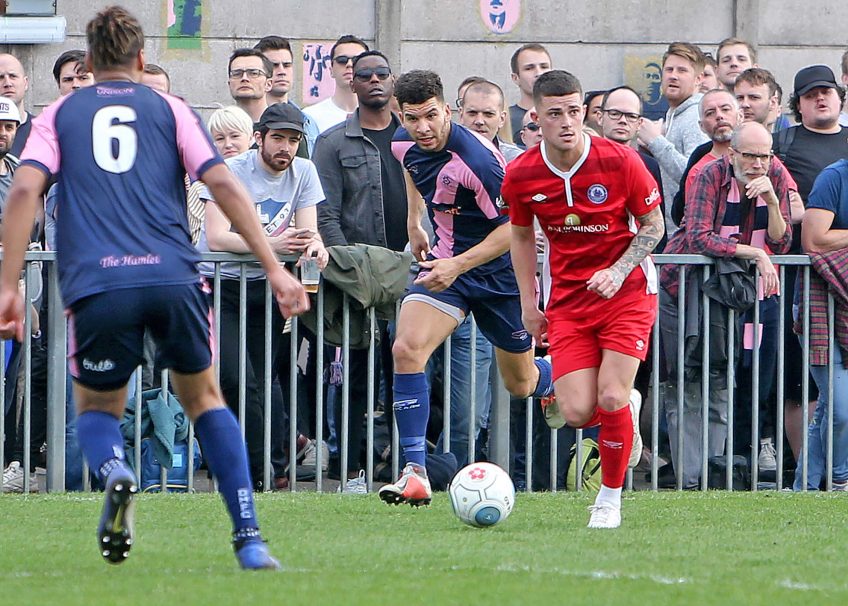 It was all change for Dulwich after a stinging 4-1 away defeat at Oxford City the previous week-end. Happy to switch formations in recent months, manager Gavin Rose started with a 4-4-2 in preference to a back three. In terms of personnel, Rose made four changes to his team to bring in the undoubted leadership qualities of centre-back Magnus Okuonghae to eliminate the defensive deficiencies on display during their last outing. Nathan Green was restored to the left wing, Dominic Vose came back into midfield, and Daniel Thompson featured up front. Making way, wingers Anthony Cook and Luke Wanadio, dropped to the bench alongside ex-Billericay defensive midfielder, Aryan Tajbakhsh. Defender, George Essuman, on loan from Torquay was not included in the squad.

On a warm, late March, Saturday, with temperatures hovering around 19c, wingers from both sides were first to shine. Dulwich wide-man, Nyren Clunis found space on 3 minutes to rifle in a dangerous cross from the right that forced Billericay goalkeeper Julian into evasive action at the near post to block for a corner. In response, on Billericay’s left flank, Jamar Loza turned inside home defender, Quade Taylor, to send in a 5th minute shot that the alert Preston Edwards pushed wide of the post. 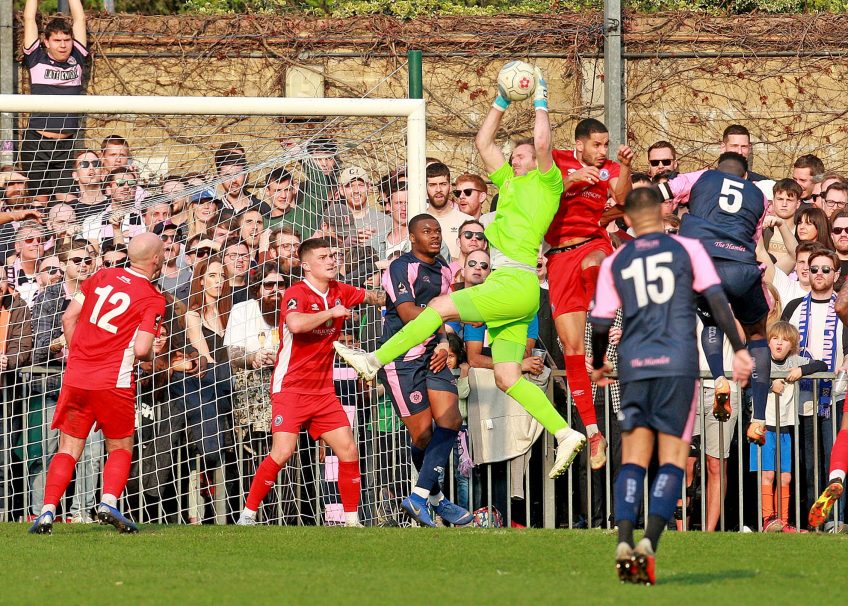 In the opening period, Billericay showed strong attacking intent with Loza and right winger, Sam Kelly, attempting to burst forward and breach the Dulwich rear-guard. Well marshalled by the impressive Michael Chambers and Okuonghae, the home side limited the blues to a series of corners. An early sighter from Danny Waldren, who hit a drive wide, was the main effort on goal.

Having impressed with his pace and movement in the reverse fixture at the AGP last October, which ended 1-1, Dulwich’s leading scorer, Akinyemi, was soon in on the action. Fed by an intelligent 14th minute through ball from Vose, the striker was to spin well to latch onto the pass. Pulling away from his marker, an accurate shot brought a save from Julian but needed more power to cause concern. 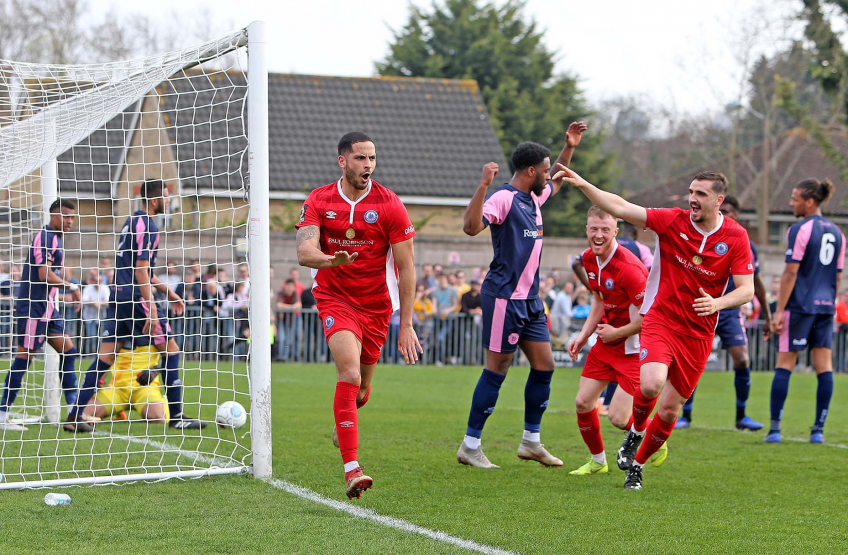 For Billericay, Paxman was enjoying his debut and was heavily involved in the best passing movements that Billericay were putting together. Busy on the right side, the attacking midfielder broke free into the Dulwich penalty area and had a 15th minute shot charged down. Bringing much needed creativity to the Blues midfield, the ex-Maidstone man would not be denied a significant role as his set piece delivery would make the difference for the 16th minute opening goal as he swung in a vicious, curling corner from the left side that was dispatched into the net by Kizzi at the far post.

Dulwich would incur further misfortune as right back Taylor succumbed to injury and had to be substituted in the 23rd minute. His replacement, Anthony Cook, a renowned winger who has been utilised at wing back by Rose, would commit the error that led to Billericay’s second goal. Stooping to guide a high ball in his own penalty area back to his goalkeeper, Cook could only send a weak header back towards goal. Reacting swiftly, Emmanuel would reach the ball first and managed to slot a 27th minute effort past Edwards for his 19th goal of the season. 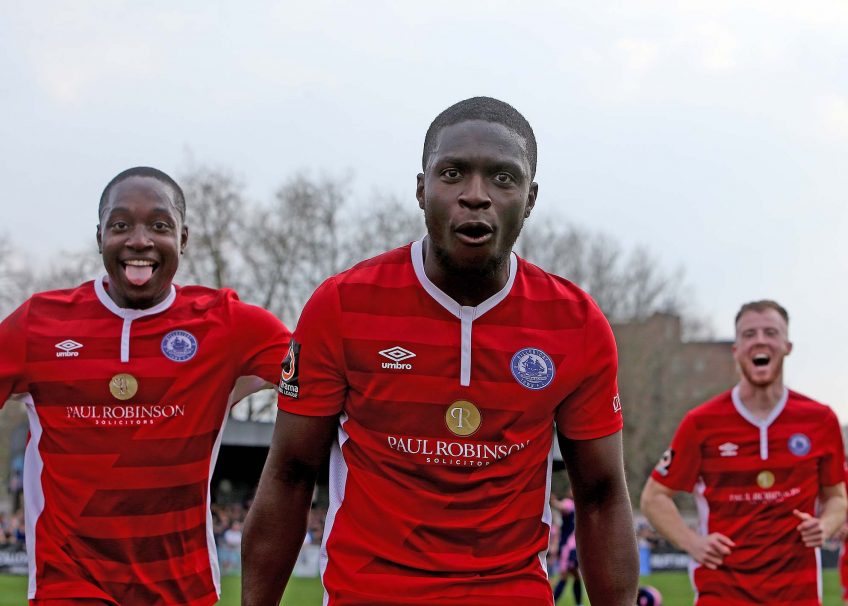 Emmanuel celebrates his 19th of the season

An apparent out of sorts, Akinyemi, wasted a further chance soon afterwards, dragging an effort wide when well placed. It would get worse for Dulwich on 39 minutes as left back Jamie Mascoll, departed with injury. Performing well in his position after the exit of Nathan Mavila to Canada, the Charlton loanee’s replacement by Tajbakhsh demanded a significant re-jig of the team. Cook was mercifully spared further defensive duties and moved to his more favoured left wing berth. Dropping back Nathan Green resumed a familiar left back role while Clunis also switched deeper to operate at right full back. Nathan Ferguson moved to the right in midfield to accommodate Tajbakhsh.

Making light of the inconvenience of the changes, Dulwich poured forward with Tajbakhsh instantly making an impression with a run forwards that was stopped illegally by Emmanuel with centimetres to spare before a penalty would have been incurred. The resultant free kick was to spark panic among Billericay ranks as the ball broke loose to Thompson in the six yard box. An instant shot by the Dulwich forward was punched away by Julian. Pressure was unrelenting as the ensuing corner saw Chambers rise highest to force the Billericay goalkeeper into yet another stop.

Dulwich ended the first half with another effort on goal as the impressive Vose, at the heart of his team’s most creative play, once again providing the ammunition for a Thompson header. Working space behind Efete at the far post, the ex-Braintree man would draw another save from the busy Julian. With momentum firmly with the home side, a relieved Billericay headed in at the break with the two goal lead somehow still intact thanks to fine goalkeeping and some poor finishing.

For the second half, Billericay started well forcing a corner that gave Loza the opportunity to fire a 50th minute drive just over the upright. Thereafter, it would be more pressure from the home side as Thompson worked an opening only to shoot disappointingly wide. On 60 minutes, a clever ball from Vose was arrowed down the right flank to be chased by the willing Akinyemi, forcing Julian out of his goal area to intervene. As pressure mounted, a succession of home corners ensued as, on occasion, all Dulwich outfield players took up positions in the Billericay half of the field. Stout defending by Blues’ Doyley and Cole Kpekawa was needed to keep the “Pink and Blue” horde at bay.

With Paxman’s influence in Billericay’s midfield waning as momentum shifted to the home side, Wheeler resorted to a pair of substitutions to seek to regain influence in the game. On 65 minutes, in place of Loza, Cunnington entered the field with the brief to hold up the ball and take pressure off the defence. This was closely followed by the entry of central defender Paul Rooney who replaced the ineffective Kelly and was tasked with playing a holding role in midfield. With Waldren moved further forward to support lone striker, Cunnington, Billericay’s changes looked more focused on regaining control in midfield and hitting back on the counter than getting a killer third goal. 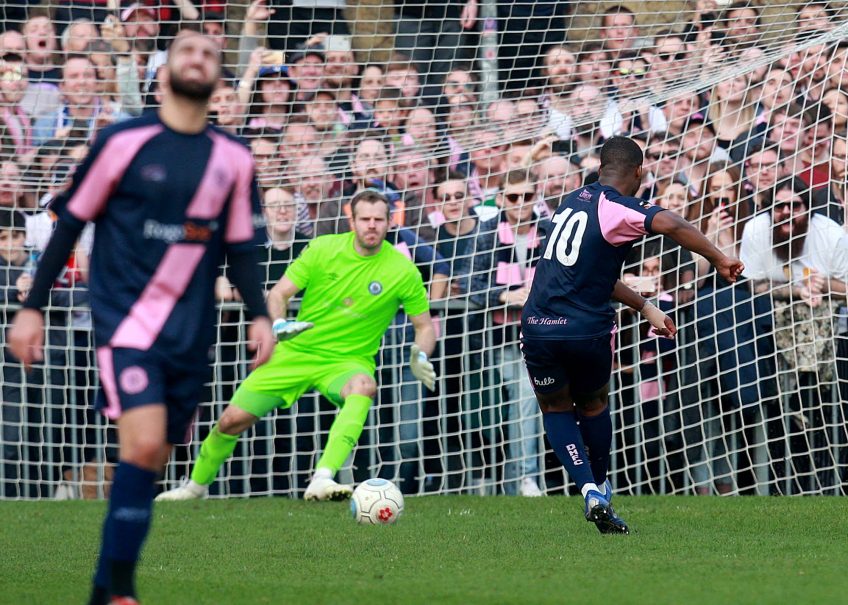 Finally, Dulwich’s persistence told as a Clunis incursion into the penalty area was ended by a clear trip from Efete. After a somewhat fitful afternoon, Akinyemi would take centre stage as the man entrusted to dispatch the 79th minute spot-kick. Having scored the decisive penalty in the play off final shoot-out last season against Hendon, that saw Dulwich accede to the National South for the first time in its history, no one in the stadium expected the striker to miss his opportunity. A well-struck shot into the bottom right hand corner beat Julian and gave the home side a lifeline.

Billericay increasingly retrenched into their own half as Cunnington ploughed a lonely furrow alone up front with insufficient support to prevent the ball quickly being sent forward by Dulwich. The final five minutes saw chance after chance created as first Thompson was denied by a last gap clearance in the six yard box. Efete was then forced to dive full length to block a venomous Tajbakhsh effort. On 87 minutes, it was Julian to the rescue once more as a far post Cook header demanded a save.

With the game firmly in Dulwich’s control, Vose came to the fore. First, he drove straight at Julian and, on 90 minutes, only the outstretched foot of Waldren prevented him from levelling the scores. In the end, Vose was to create Dulwich’s equaliser, curling a dangerous ball into the near post. In the ensuing scramble to prevent the prowling Okuonghae from heading home, Billericay’s Doyley reached the ball first but headed home into his own net to secure Dulwich a deserved point. 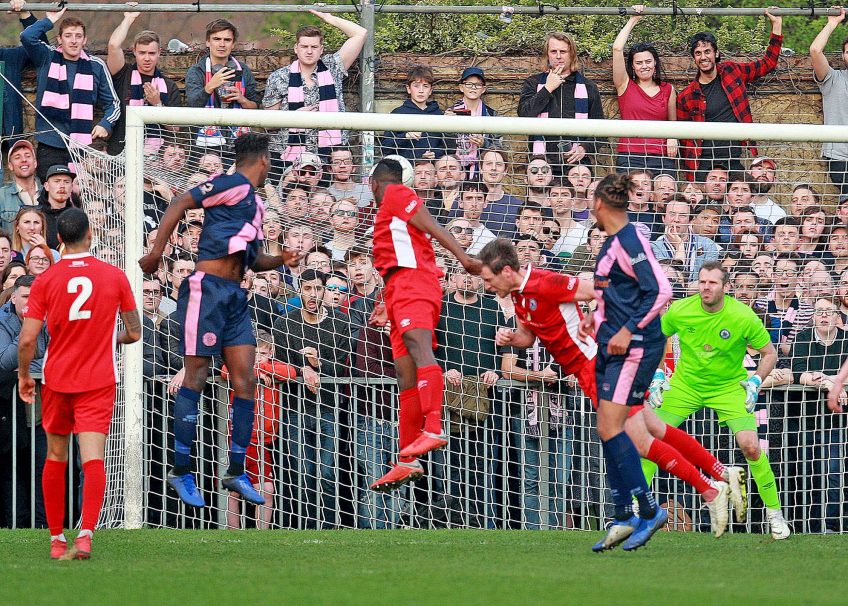 Doyley own goal levels it at 2-2

After a miserable run of results, including a particularly poor showing at home versus Hungerford, the Blues bounced back with an improved performance against a technically adept Dulwich side. Having secured a two goal lead, the team seemed to settle for holding on to the result rather than remaining on the offensive, and handed the initiative to a willing home side. New recruit, Paxman, shone in glimpses and offers hope that the creative spark that is lost when Sam Deering is absent can be rekindled. Within a strong squad, Wassmer and Robinson, remain significant losses and their returns will help build confidence within a team that has had to encounter a poor run of results. 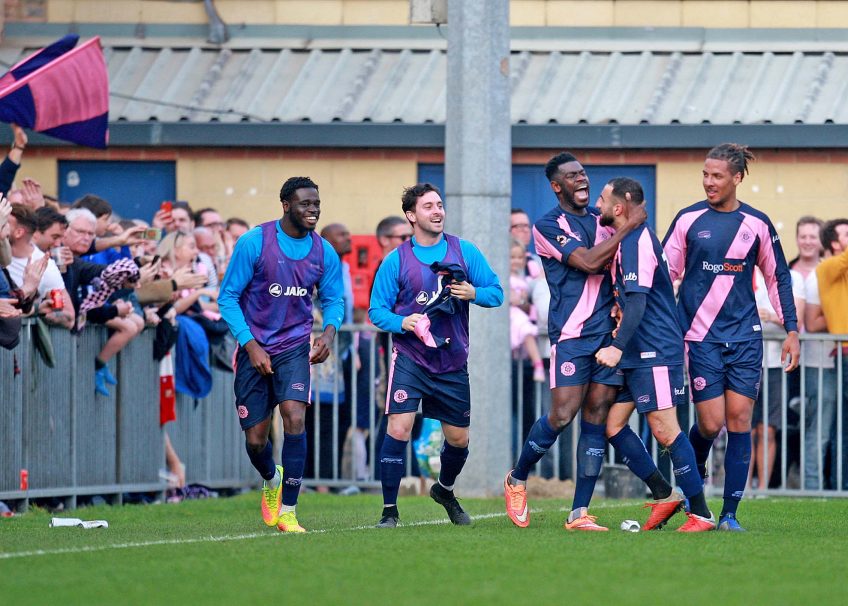 Results elsewhere ensure that Billericay remain in 7th place, which is the final play-off position. Just one point clear of nearest rivals, Concord Rangers, the next match at home to struggling Hampton & Richmond is a “must-win” game for the team and opportunity to rebuild confidence.