Written by Paul Golder in In The Papers👁 843 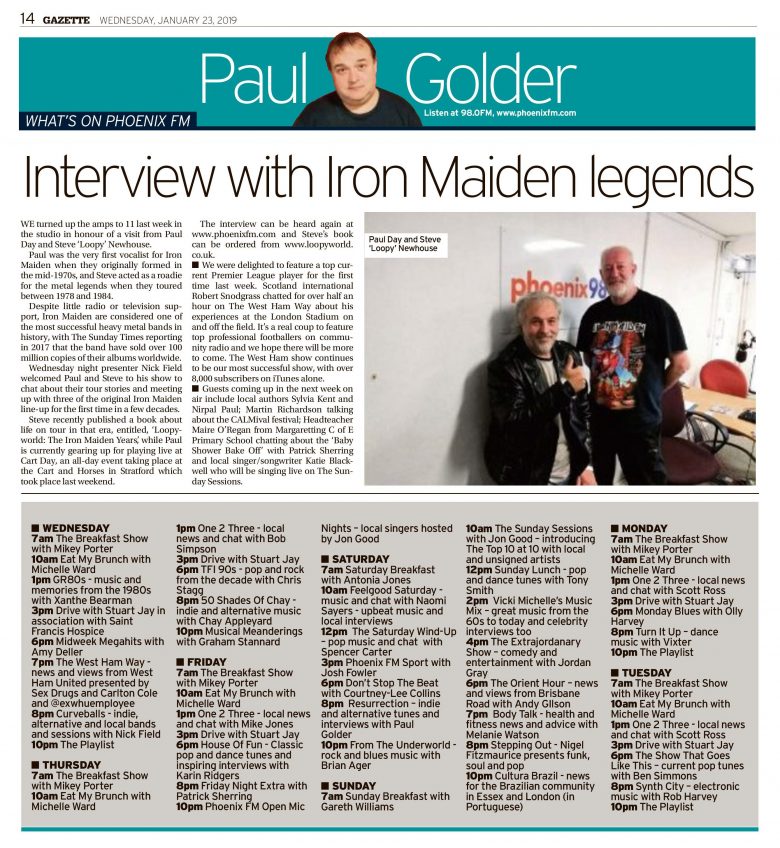 We turned up the amps to 11 last week in the studio in honour of a visit from Paul Day and Steve “Loopy” Newhouse.

Paul was the very first vocalist for Iron Maiden when they originally formed in the mid-1970s, and Steve acted as was roadie for the metal legends when they toured between 1978-1984.

Despite little radio or television support, Iron Maiden are considered one of the most successful heavy metal bands in history, with The Sunday Times reporting in 2017 that the band have sold over 100 million copies of their albums worldwide.

Wednesday night presenter Nick Field welcomed Paul and Steve to his show to chat about their tour stories and meeting up with three of the original Iron Maiden line-up for the first time in a few decades!

Steve recently published a book about life on tour in that era, entitled Loopyworld: The Iron Maiden Years, while Paul is currently gearing up for playing live at Cart Day, an all-day event taking place at the Cart & Horses in Stratford which took place last weekend.

The interview can be heard again at www.phoenixfm.com and Steve’s book can be ordered from www.loopyworld.co.uk.

* We were delighted to feature a top current Premier League player for the first time last week. Scotland international Robert Snodgrass chatted for over half an hour on The West Ham Way about his experiences at the London Stadium on and off the field. It’s a real coup to feature top professional footballers on community radio and we hope there will be more to come. The West Ham show continues to be our most successful show, with over 8,000 subscribers on iTunes alone.

* Guests coming up in the next week on air include local authors Sylvia Kent and Nirpal Paul; Martin Richardson talking about the CALMival festival; Headteacher Maire O’Regan from Margaretting C of E Primary School chatting about the “Baby Shower Bake Off” with Patrick Sherring and local singer/songwriter Katie Blackwell who will be singing live on The Sunday Sessions.