On Sunday 4th March I visited the Hive Enterprise Centre in Southend which was hosting a Raspberry Pi Big Birthday Jam organised by Andy from SouthendTech.  Andy was on the last show week to promote the event and also gave us an introduction to the Pi itself.

We chatted with STEM Ambassador, Ed Bye, about the Pi, its coding abilities and how youngsters are getting involved with programming using this cheap (and very flexible) computer. 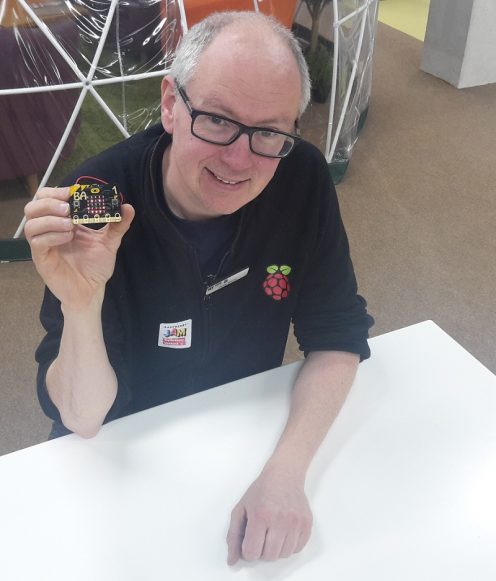 David Whale, aka @whaleygeek , co-author of Adventures in Minecraft – was kind enough to talk about the BBC Micro:bit – a British-made “micro” computer that features an array of on-board tech which David expertly modelled for us in the above picture!

I also bumped into our gadget-guru, Pete Sipple, who was at the event to promote the use of Raspberry Pis in his hobby of Amateur Radio – on display was a very neat aircraft tracker using a cheap USB dongle receiver and a Pi Zero.  I also spoke with his daughter, Kathryn, who managed to have her own Raspberry Pi code run on the International Space Station as part of Astro Pi.

Just what is a Raspberry Pi Jam?  Find out on the official website here!