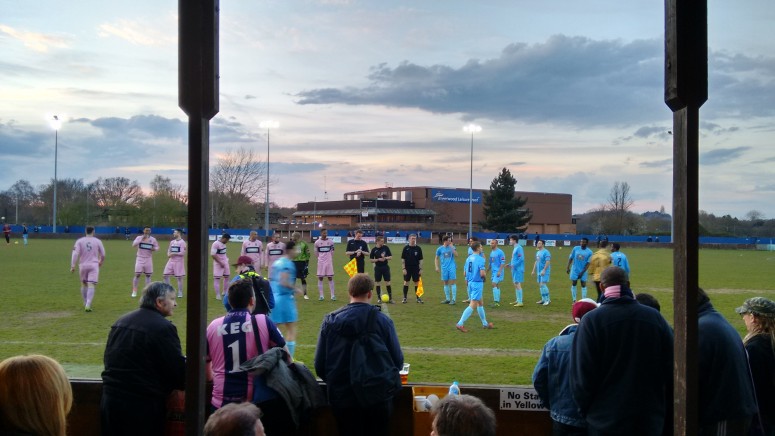 Both teams came into this game at the Arena on Tuesday night on the lookout for three points, but for very different reasons. Dulwich hoped to move closer to a playoff place, while Brentwood were hoping to keep their slim hopes of survival alive.

However, the match couldn’t have started much worse for the hosts as, a minute into the match, Dulwich earned a corner which Brentwood captain Martyn Stokes put past Ollie Bowles to give the visitors a 1-0 lead.

Brentwood had seemingly still not left the dressing room as Dulwich looked dangerous early on. In fact, Brentwood took until 10 minutes in to kick into gear, as Petrit Elbi weaved his way through the midfield.  But, it was clear who was the superior of the two sides as Dulwich showed off their technical prowess; Rhys Murrell-Williamson wowing the assembled crowd with an overhead kick, before failing to connect with a much easier shot when looking certain to score.

Alex Teniola was making a nuisance of himself up front, twisting and turning to earn a corner, the resulting header glanced wide.

Dulwich Hamlet nearly became their own worst enemies 22 minutes in, as Brentwood pressure caused a pass back, which was picked up by the Dulwich keeper Preston Edwards, conceding an indirect free kick.  However, the free kick was blazed over, wasting a great opportunity to equalise.

Mitchell Nelson was next to have a chance for the visitors, his header going over the crossbar, before Connor Witherspoon found some joy in midfield, but that ultimately came to nought.

Murrell-Williamson was still the danger man for Dulwich, but shot tamely at Bowles after a great run 36 minutes in.

Despite all the Dulwich pressure, Brentwood nearly went in level at half-time, a scramble in the area unable to be converted.  So, Dulwich went in a goal to the good, but Brentwood had improved after a slow start.

The second half started much like the first, Brentwood again slow out of the blocks, and again Dulwich took advantage.  A free kick on the by-line was punched by Bowles but only to Ethan Pinnock who tapped in as the ball fell at his feet.

Brentwood were still fighting and Teniola held the ball up well without there being any options, eventually slicing well over.

On 58 minutes, a lifeline.  Sam Cross stepped up to a dangerously placed free kick, slotting in expertly past Edwards.

This gave Brentwood a new lease on life, as a foul allowed Marcus Milner to whip the ball into the Dulwich box, which was well held by the keeper.  Teniola then went for the spectacular as he attempted an overhead kick, but there was no goal despite excellent execution.

The remainder of the game was broken up by a number of substitutions for both sides, with the only meaningful chance coming from Lawrence Yiga for the visitors who chipped nonchalantly over Bowles, but also over the bar.

Brentwood huffed and puffed, but couldn’t break Dulwich down and slipped to another defeat.

VIEW FROM THE ANALYST: SCOTT W

Brentwood Town knew they needed a win from this match and they started nervously. Dulwich taking the lead after just a minute only added to the jitters and the Blues’ had their hands full keeping the arrears to just one goal for the rest of the first half, defending manfully.
However, Dulwich started the second half as they did the first by getting a second goal, it took a beautiful curling free-kick by Sam Cross to really get the Blues motoring against their more assured opponents. Whilst the Blues’ created more chances in the more evenly-contested second period, Dulwich were still dangerous and full of running on the counter-attack and ultimately were the better side throughout.
—
Brentwood Town Line-up: 21 Ollie Bowles, 2 Marcus Milner, 3 Sam Cross, 4 Martyn Stokes (c), 5 Ryan O’Rawe, 20 Simon Glover, 7 Robbie Rees (15 Jack Suters 90’), 8 Connor Witherspoon (12 Mitch Hahn 74’), 9 Petrit Elbi (14 Shad Ngandu 73’), 10 Alex Teniola, 11 Andrew Freeman