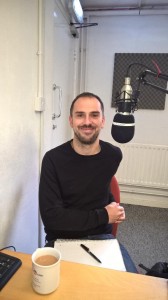 Joined in the studio by film producer and director, Christopher Smith.

Over the past 2 years Christopher has been developing a documentary film that’s focused on Basildon, called New Town Utopia.  https://modernmovingimage.com/newtownutopia/.  The project is nearing completion.

The film is focused on the importance of creativity, art and culture to the town. All of the New Towns were designed to be ‘hubs’ for art and culture – in Basildon’s case its clear things may not have worked out as planned – and in the film he explores how the town has changed and why. It’s about Basildon but also touches on the roller coaster for many towns outside of major cites in the UK.

Christopher has spent considerable time observing and interviewing people from the town involved in arts and culture from the early days of the town to the present day. The characters in the film include a real range of artists and musicians from the town – from Steve Waters (the puppeteer behind Old Man Stan videos and bane of the local council) to folk and blues musician Phil Burdett, poets Ralph Dartford and Olmo Lazarus and other musicians and players in the early ’80s Towngate/electro scene that spawned Yazoo, Depeche Mode etc.

The film should be completed by the end of this year and will be targeting a run at film festivals around the world and then television broadcast and theatrical release. The documentary is already building a strong audience of fans across social media. The plan is that this  project should show Basildon in a different light and hopefully inspire positive community action (a community outreach programme to work with the film is in the early planning stages).

YOUR CHANCE TO GET INVOLED

Most of the footage has been shot by Christopher and the crew over the past 18 months. However they’ve also begun looking for archive footage or personal footage of people in the town that could help
twitter.com/modernmi
modernmovingimage.com