Phoenix FM presenters choose the songs that made their summer this year! 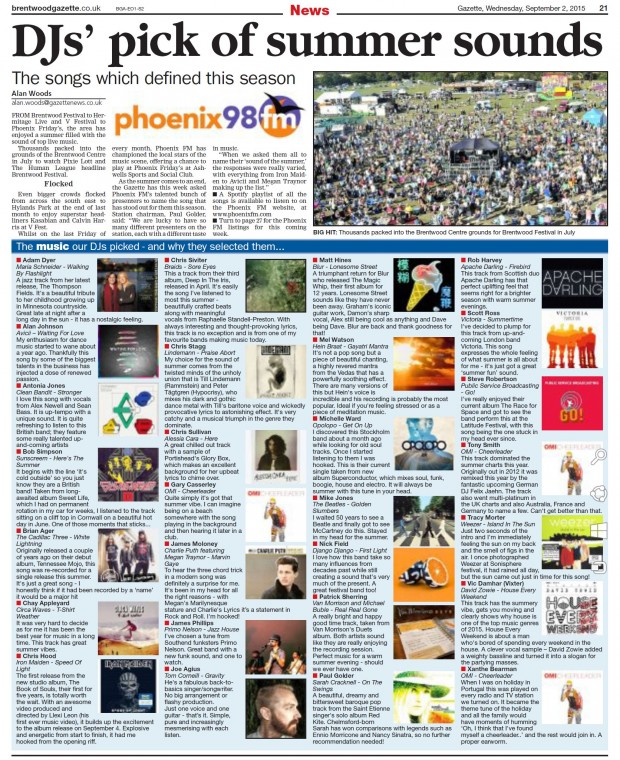 A jazz track from her latest release, The Thompson Fields. It’s a beautiful tribute to her childhood growing up in the Minnesota countryside. Great played late at night after a long day in the sun – it has a nostalgic feeling for summers past.

My enthusiasm for dance music started to wane about a year ago – a bit of a shame as I couldn’t put my finger on what had changed. Thankfully this song by some of the biggest talents in the business has injected a dose of renewed passion!

I love this song with vocals from Alex Newell and Sean Bass, it’s up-tempo with a very unique dance / electronic sound. it’s quite refreshing to listen to this British band, because they produce some great music and have featured some really talented up-and-coming artists including Jess Glynne.

It begins with the line “It’s cold outside” so you just know they are a British band!
Taken from their long awaited new album Sweet Life which I had on permanent rotation in my car for weeks and listened to the track sitting on a cliff top in Cornwall on a beautiful hot day in June looking out over an azure blue sea watching the little boats and the seagulls. One of those moments that stick with you….

Originally released a couple of years ago on their debut album, Tennessee Mojo, this song was re-recorded for a single release this summer. It’s just a great song – I honestly think if it had been recorded by a “name” it would be a major hit and a song you will be hearing for many years to come.

It was very hard to decide as for me it has been the best year for music in a long time. This track has great summer vibes.

The first release from the new studio album, The Book of Souls, their first for five years, is totally worth the wait. With an awesome video produced and directed by Llexi Leon (his first ever music video!), it builds up the excitement to the album release on 4 September. Explosive and energetic from start to finish, it had me hooked from the opening riff.

This a track from their third album Deep In The Iris, released in April. It’s easily the song I’ve listened to most this summer; beautifully crafted beats along with meaningful vocals from Raphaelle Standell-Preston. Always interesting and thought-provoking lyrics this track is no exception, one of my favourite bands making music today.

My choice for the sound of summer comes from the twisted minds of the unholy union that is Till Lindemann (Rammstein) and Peter Tägtgren (Hypocrisy), who mixes his dark and gothic dance metal with Till’s baritone voice and wickedly provocative lyrics to astonishing effect. It’s very catchy and a musical triumph in the genre they dominate.

A great chilled out track with a sample of Portishead’s Glory Box, which makes an excellent background for her upbeat lyrics to chime over.

Quite simply it’s got that summer vibe. I can imagine being on a beach somewhere with the song playing in the background and then hearing it later in a club.

To hear the three chord trick in a modern song was definitely a surprise for me . It’s been in my head for all the right reasons – with Megan’s Marilynesque stature and Charlie’s Lyrics it’s a statement in Rock and Roll. I’m hooked!

I’ve chosen a tune from Southend funksters Primo Nelson. Great band with a new funk sound, and one to watch.

He’s a fabulous back-to-basics singer/songwriter. No big arrangement or flashy production. Just one voice and one guitar – that’s it. Simple, pure and increasingly mesmerising with each listen.

I kept hearing it at the gym but it took me ages to find out what it was as it was never back-announced the station I was listening to! (Wouldn’t have happened on Phoenix … PG)

A triumphant return for Blur who released The Magic Whip, their first album for 12 years. Lonesome Street sounds like they have never been away. Graham’s iconic guitar work, Damon’s sharp vocal, Alex still being cool as anything and Dave being Dave. Blur are back and thank goodness for that!

It’s not a pop song but a piece of beautiful chanting; a highly revered mantra from the Vedas that has a powerfully soothing effect. There are many versions of this but Hein’s voice is incredible and his recording is probably the most popular. Ideal if you’re feeling stressed or as a piece of meditation music.

Michelle Ward
Opolopo – Get On Up

I discovered this Stockholm band about a month ago while looking for old soul tracks. Once I started listening to them I was hooked. This is their current single taken from new album Superconductor, which mixes soul, funk, boogie, house and electro. It will always be summer with this tune in your head.

I waited 50 years to see a Beatle and finally got to see McCartney do this. Stayed in my head for the summer

I love how this band take so many influences from decades past while still creating a sound that’s very much of the present. A great festival band too!

I first heard it when I was visiting a friend in Cornwall after we had just been to Glastonbury and I loved it! On top of it being a classic club tune that I enjoy dancing to it also brings back the memories of my time in Cornwall and at Glasto – and for me summer time is all about spending time away from home, festivals and being with friends!

A really bright and happy good time track, taken from Van Morrison’s Duets album. Both artists sound like they are really enjoying the recording session. Perfect music for a warm summer evening – should we ever have one!

A beautiful, dreamy and bittersweet baroque pop track from the Saint Etienne singer’s solo album Red Kite. Chelmsford-born Sarah’s solo recording has won her comparisons with legends such as Ennio Morricone and Nancy Sinatra, so no further recommendation needed!

This track from Scottish duo Apache Darling has that perfect uplifting feel that seems right for a brighter season with warm summer evenings.

I’ve decided to plump for this track from up-and-coming London band Victoria. This song expresses the whole feeling of what summer is all about for me – it’s just got a great “summer fun” sound.

Iron Maiden roar back into the metal scene with this punchy number, can it get you fired up? You can get lost in the fiery guitars … enjoy it!

I’ve really enjoyed their current album The Race for Space and got to see the band perform this at the Latitude Festival, with this song being the one stuck in my head ever since.

This track dominated the summer charts this year! Originally out in 2012 it was remixed this year by the fantastic upcoming German DJ Felix Jaehn. The track also went multi platinum in the UK charts and also Australia, France and Germany to name a few! Can’t get better than that!

Just two seconds of the intro and I’m immediately feeling the sun on my back and the smell of figs in the air. I once photographed Weezer at Sonisphere festival, it had rained all day, but the sun came out just in time for this song!

This track has the summery vibe, gets you moving and clearly shows why House is one of the top music genres of 2015. House Every Weekend is about a man who’s bored of spending every weekend in the house with his girlfriend, instead wishing to spend his time partying to gain a release from day-to-day life. A clever vocal sample in which a woman was originally complaining about “staying in the house every weekend”, David Zowie added a weighty bassline and turned it into a slogan for the partying masses.

When I was on holiday in Portugal this was played on every radio and TV station we turned on! It became the theme tune of the holiday and all the family would have moments of humming “Oh, I think that I’ve found myself a cheerleader..” and the rest of us would then join in. It’s a proper Earworm!