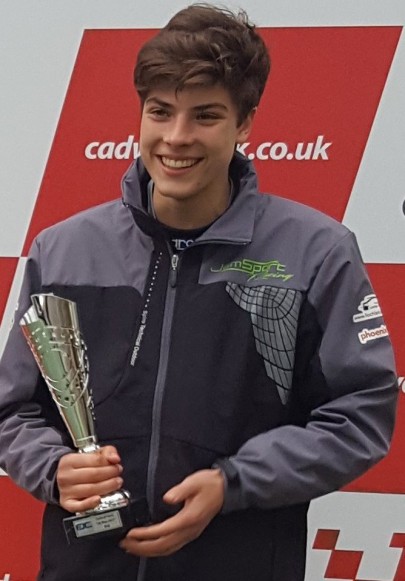 Cadwell is known as the mini Nurburgring said Bearman as it’s fast, twisty, narrow and if you come off you are going to have a big accident. It’s exhilarating to drive and through the section called the ‘Mountain’ the car gets airborne said the PhoenixFM driver.

Having been disappointed with his results of 9th and 5th at Brands Bearman was looking for a good result to get his Championship bid back on target. Practise went very well and saw him constantly in the top 4. In final practise we learnt that new tyres were worth about 2 seconds a lap and as I was closer than that on old rubber I felt confident going into qualifying.

“It’s important to time your runs in qualifying”, said Bearman, “as the tyres effectively have a 3 lap ‘window’ where they offer optimum performance and then they even out. In qualifying my plan was to get some space and put in 3 fast laps. Unfortunately as I started my first hot lap there was an accident which brought out the red flag stopping the session. When it was restarted I then encountered traffic which cost me time and ultimately the chance to go quicker on the new tyres. The end result was 5th on the grid 3 tenths off pole.”

In Race 1 Bearman made good start going around the outside of the long sweeping uphill Coppice corner and onto the back straight. As they came up to the braking zone for Park corner at over 100mph he made a move for 3rd but was blocked off. He held his position and began to slowly pull up to second place man when the Code 60 flag was deployed. This means there has been an incident and all drivers must slow to 60 KPH. At the restart the field had closed up and as Bearman worked to close the gap to second place he came under pressure from 4th. Now having to defend Bearman finally crossed the line in 3rd just 3/1000 ahead of 4th. I thought I’d catch second place but had to start taking more defensive lines which slowed me up and that’s as close a finish as I’ve ever been in.

In Race 2 he would start from 3rd on the grid. The 4th placed man made an incredible start and was leading by the time the cars turned into the left hand Coppice corner demoting Bearman to 4th. Bearman then gradually caught 3rd place but on the thin Cadwell Park track found 3rd position was being firmly defended. Eventually the PhoenixFM driver got through having planned his move and setting it up 3 corners in advance. I had to be close through the first 2 turns and onto the straight. I knew he would defend but as he moved back across to take the racing line I out braked him down the inside. Bearman was now looking safe in 3rd but as the race continued he suffered understeer in his car. The tyres had passed their best and I knew those around me were on good rubber said Bearman. The 4th placed man caught him on the last lap and Bearman had to use all his karting experience to keep him behind. At the very last corner the 4th placed driver dived up the inside but Bearman was ready. I knew he’d come in too hot so as he passed I undercut him and retook 3rd before the line – another close finish!

Lochlan said, “After Brands it was good to come away with a solid performance and 2 podiums. We’ve a few areas of the car to improve on and if I can find some money hopefully we can have those on the car for Silverstone at the end of May. Great to be back on the podium!”