With one in four people suffering from a mental health problem, World Mental Health Day is a day for global mental health education, awareness and advocacy.

Today, October 10th is World Mental Health Day, which this year, is focussed on the positive aspects of mental health in later life.

We’re all aware of the enormous problems that loneliness, isolation, dementia and depression can cause for older people, But did you know that on average people aged 55 and over have greater life satisfaction than people aged 25-54? (statistics from the Office of National Statistics).

One of the most common mental illness in young and old alike is depression and it is estimated by the Mental Health Foundation that between 10 and 16% of people over 65 have depression with up to 4% suffering from severe depression.

Many older people live alone and this, combined with a gradual loss of independence, experiencing an increased number of bereavements and declining physical health, all contribute to feelings of depression. it is very important to exclude an underlying physical cause.

Additional symptoms which can help in the diagnosis of depression are a loss of motivation to do activities previously enjoyed, or a loss of enjoyment in unexpected areas, for example, seeing children or grandchildren.

The first port of call for anyone who feels they may be depressed is to see their GP, but there are a whole host of support services too, including the excellent people at Brentwood Mind who are on hand for support and advice on 01277 234 246. They’ll help you smile again!

Larry Pegg is a Canadian musician who has devoted his new album to raising awareness and funds for the cause of Mental Health and Suicide Prevention. Larry has said, “Following the death of my beautiful and vibrant daughter who died by suicide in December 2007, music has become much bigger part of my life than I ever expected. It is the glue that holds me together, a big part of my ongoing therapy, in this aftermath of grief and depression.” 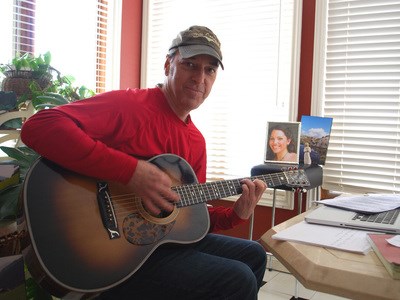 We played Larry’s great track “Looking for the One” – Thanks Larry! You can find out more about Larry here – https://www.lpgroove.ca/

So we also had a couple of silly news stories to cheer us up!

A henpecked husband went to extreme lengths to hide his big night out with the boys from his wife after apparently faking his own kidnapping.

He persuaded friends to break into his house, and extract him for a night of partying, police say.

The masked men stormed in brandishing guns and bundled him into the back of a van before speeding off.

His terrified wife watched the drama unfold before calling the police.

He claimed his kidnappers had set him free after returning home but he was later charged with making a false report after failing to convince police, who said ‘He’s going to party in jail now.

‘It’s humorous in a way, but also it’s very serious. ‘We have people file false reports all the time, and we put them in jail for it. ‘But we’ve never had someone do it just to get out of the house.’

A father who has turned up alive after more than 20 years missing has been told he will remain “legally dead”.

Having heard nothing from him for years, his wife applied for a court to declare him legally dead in 1994 so that benefits could be paid to their two children.

Mr Miller returned to the Ohio area in 2005 and was informed by his parents of his “death”.

On Monday he asked a court to reverse the decision, saying he had been an alcoholic at the time and was unsure what to do after losing his job.

Mr Miller had said he would like to start his life again, or “whatever’s left of it”,

But a judge rejected the application because there is a three-year limit on appealing a death ruling.

Judge Davis admitted the case was a “strange, strange situation.”